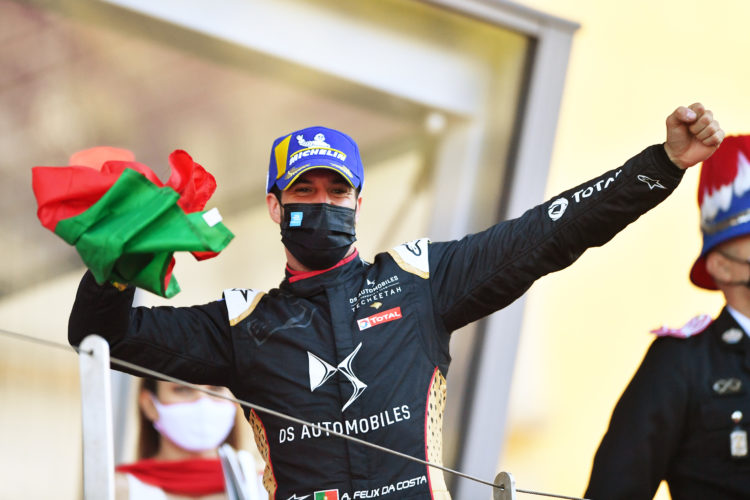 The current champion started from pole and got a strong start off the line, while further back chaos ensued with a multi-car traffic jam at the Grand Hotel Hairpin forcing Mahindra’s Alexander Sims to retire with heavy damage.

However, da Costa’s lead would not last for long as Frijns dived up the inside of the DS Techeetah at Sainte Devote.

The pair would continue to duel for the lead, with the two trading first and second as they activated attack mode.

In the battle for third, Jean-Eric Vergne went side-by-side with Evans into the Nouvelle Chicane, forcing the New Zealander to go straight on and allowing BMW i Andretti’s Maximillian Guenther to jump the pair for third.

With 25 minutes remaining, Frijns activated his second attack mode and dropped behind Da Costa, before the Dutchman put on a stellar move on the exit of the tunnel to retake the lead.

Yet it was Evans who was on the charge after recovering from his incident with Vergne earlier on. The Kiwi swept around the outside of Frijns at Saint Devote, before a nail-biting move on da Costa at Beau Rivage saw him snatch the lead.

Rene Rast’s stranded Audi then brought out the safety car after hitting the wall during his duel with the second Envision Virgin of Nick Cassidy.

Racing got back underway with 6 minutes remaining, as a five-way battle for the podium got underway as Evans, da Costa, Frijns, Guenther and Vergne all fought for glory.

On the last lap, da Costa stormed his way to the lead from Evans, locking up and banging wheels with the Jaguar into the Nouvelle Chicane and crossing the line for the victory.

Evans was then forced to settle for third, as whilst regenerating enough energy to finish, Frijns pipped him on the line.

Vergne narrowly missed out on a podium in fourth. However, the Frenchman did earn an additional point for the Tag Heuer Fastest Lap and finished just ahead of Guenther, in strong showing for the German driver.

Nissan e.dams’ Oliver Rowland crossed the line in sixth, while an impressive performance from Sam Bird saw the Jaguar climb up from 16th to seventh.

Cassidy crossed the line in eighth as the highest placed rookie, with Porsche’s Andre Lotterer and Mahindra’s Alexander Lynn rounding out the top 10.

Contrastingly, it will be a weekend to forget for the Mercedes EQ pair of Nyck de Vries and Stoffel Vandoorne. After his difficulties in qualifying, de Vries was already on the back foot and a stop-go penalty for a power and gear box change put an end to any hopes of moving up the grid.

Both drivers were eventually forced to retire from the race.

As a result, Frijns has jumped to the top of the Drivers’ Standings on 62 points, five points ahead of compatriot de Vries. His victory today has seen da Costa put himself firmly in title contention in fourth, two points behind Evans.

Despite their lack of points this weekend, Mercedes EQ remain at the top of the Teams’ Championship on 105 points, two points ahead of Jaguar.

Thoughts now turn to the double-header in Mexico, with the Puebla E-Prix scheduled to take place on June 19th and 20th.