On the technical side, the most anticipated single-seater in America was the Mercedes W13, with the Brackley team having to introduce the last big package of updates of 2022. 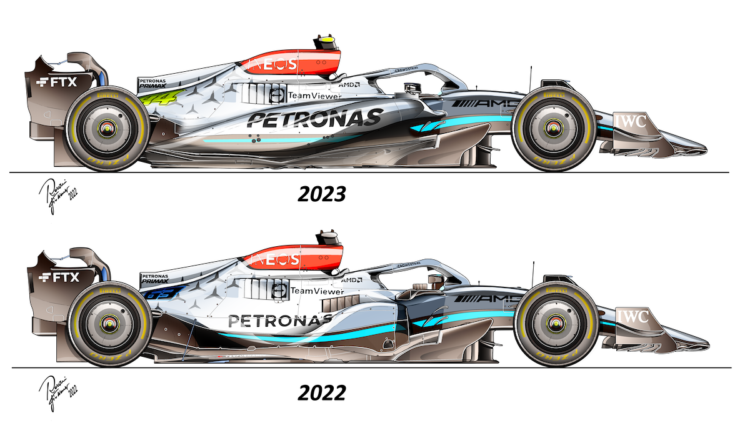 The United States Grand Prix marks the 19th round of the 2022 season and therefore news of upgrades is thin on the ground, as teams focus instead on 2023. However Mercedes arrived at the race in Austin with a surprisingly large update to their W13.

Of course the new update is likely with a view to 2023, giving us some technical insight into the W14. Overall 2022 was a very disappointing year for the Mercedes which so far remains winless.

In Austin, the main technical argument concerned the front wing introduced by Mercedes, which immediately raised doubts about its legality. Through a technical loophole, the “slot gap brackets” have been transformed into flow deviators, with the task of accentuating the out wash. These eight deviators, placed at the junction of the last two flaps, generate aerodynamic vortices that go against the spirit of the 2022 technical regulations. 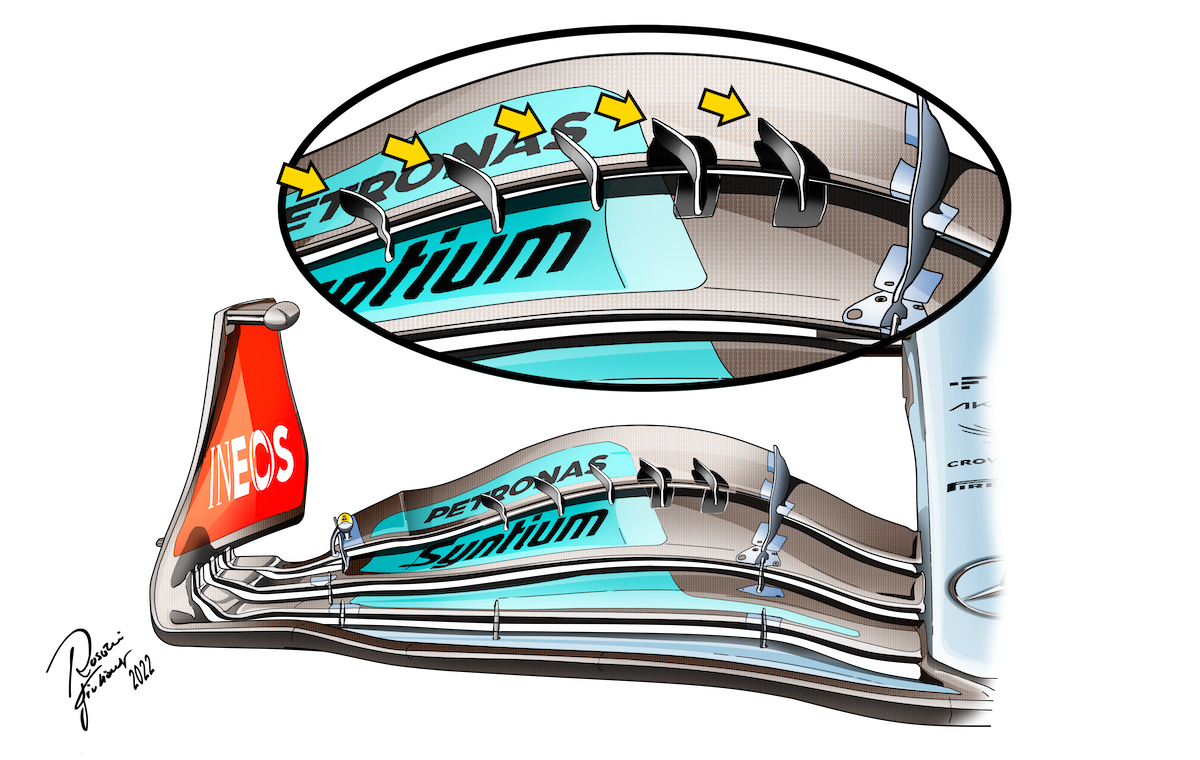 The 2022 regulations were designed precisely to have “clean” air flows, removing the dirty air aspect that disrupts following cars. Apparently, however, this new wing was first declared legal by the FIA ​​technical department, only to be declared non-compliant on Friday in Austin. In fact, Mercedes did not use this specification on Friday, which would have been tested only by Lewis Hamilton since the pieces brought to America were few.

The front wing would not be compliant for a matter related to the geometry of the brackets, regulated by article 3.9.8 part b. These elements are well defined by the regulations, and must respect a maximum measurement of 40mm in width, 6mm in thickness, and 70mm in depth. However, the technical department of the FIA ​​declared the wing compliant when Mercedes presented the project in 3D CAD (as is usual for all teams who want to introduce developments). Here, therefore, a problem arises for Mercedes, which has spent financial resources to produce a component declared legal.

However, if Mercedes run it and successfully argue its legality, it is highly likely that the rules will be changed for 2023, as is the case with Aston Martin’s unique rear wing. The FIA ​​could update paragraph 3.9.8 to prevent “ambiguous” elements from being adopted. Recall that the FIA has already rejected the cut endplate introduced by Mercedes in Miami for 2023, and used throughout the season. Just in Austin, this area has also been slightly revised. 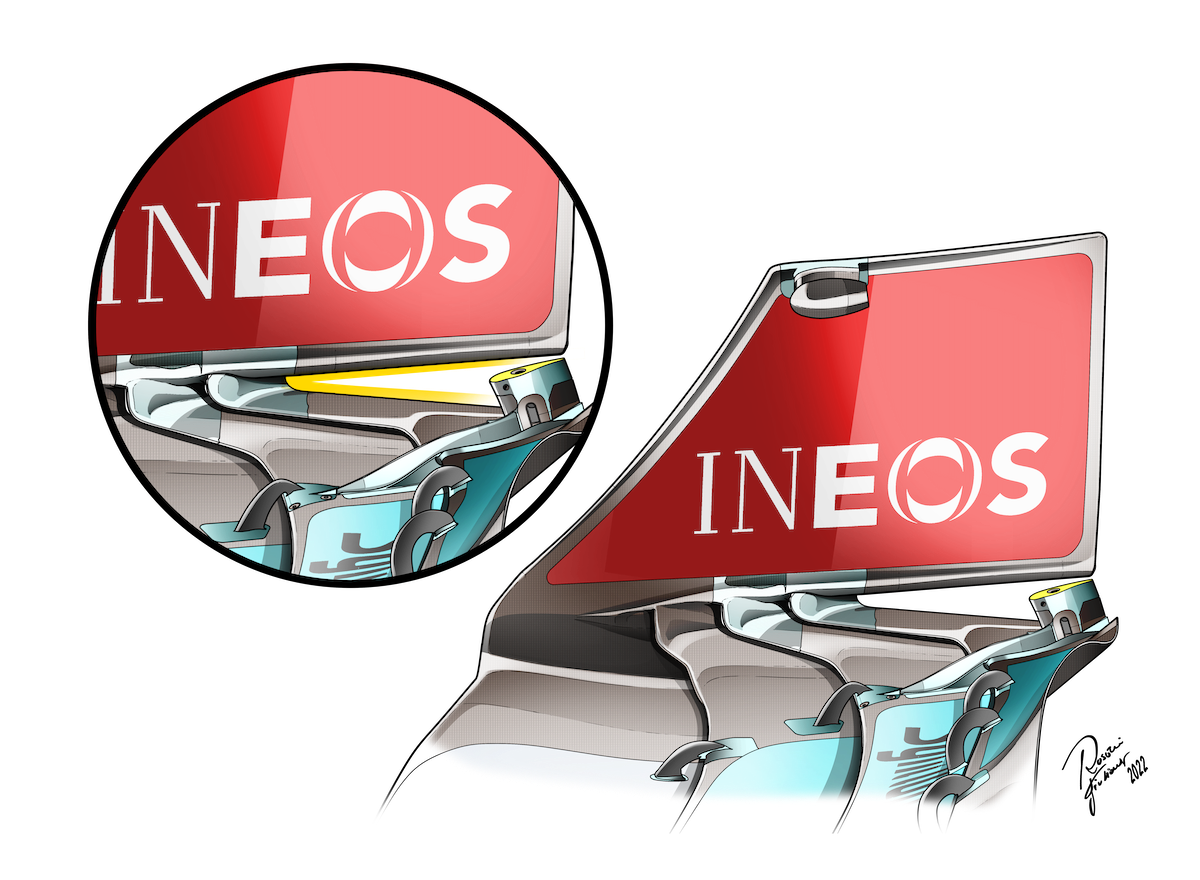 Other important innovations for the W13 in the land of Texas involved a profound reinterpretation of the side edge of the floor and of the internal fences. Mercedes’ intent is clearly to try to improve the efficiency of the air flow that flows across the top of the floor. One of the main problems with the Brackley-designed 2022 car is the aerodynamic lockout, which creates significant drag and slowness down the straights.

Small changes also to the rear wing endplate, visually imperceptible in shape but which mainly concern a different orientation of the carbon fibre. One of Mercedes’s main goals was also to progressively reduce the weight of the W13, as most of the times this year. Even if it is visually impossible to notice. In Austin Mercedes reduced its weight in a range of no more than 5kg, which is still a lot for an F1 car.

The W13 project could be defined as bankruptcy at the moment in its technical concept. Mike Elliott’s car surprised at the beginning of the year for the aerodynamic shapes on the sides, super tapered and defined as a “zero-sidepod” single-seater. If with the cars of the previous generation (from 2017 to 2021) having narrow sides was the winning weapon for better aerodynamics, on the 2022 single-seaters this was not the case. Many smaller teams, such as McLaren and Williams for example, had adopted a shape of the sidepods similar to that of Mercedes, and then developed their cars by adopting choices more similar to the Red Bull and Ferrari shapes. To tell the truth, Red Bull was the one most “copied” by rivals not because it is the best car, but because of the ease of implementation of the aerodynamic concept. The internal mechanics of the Ferrari engine makes it possible to use sidepods equipped with the “tub”, which on other cars with other Power Units is quite difficult due to the internal mechanical dimensions. It is still unclear whether the zero-sidepods concept will be shelved on the W14, as the Brackley team has continued to insist on this philosophy and in development. 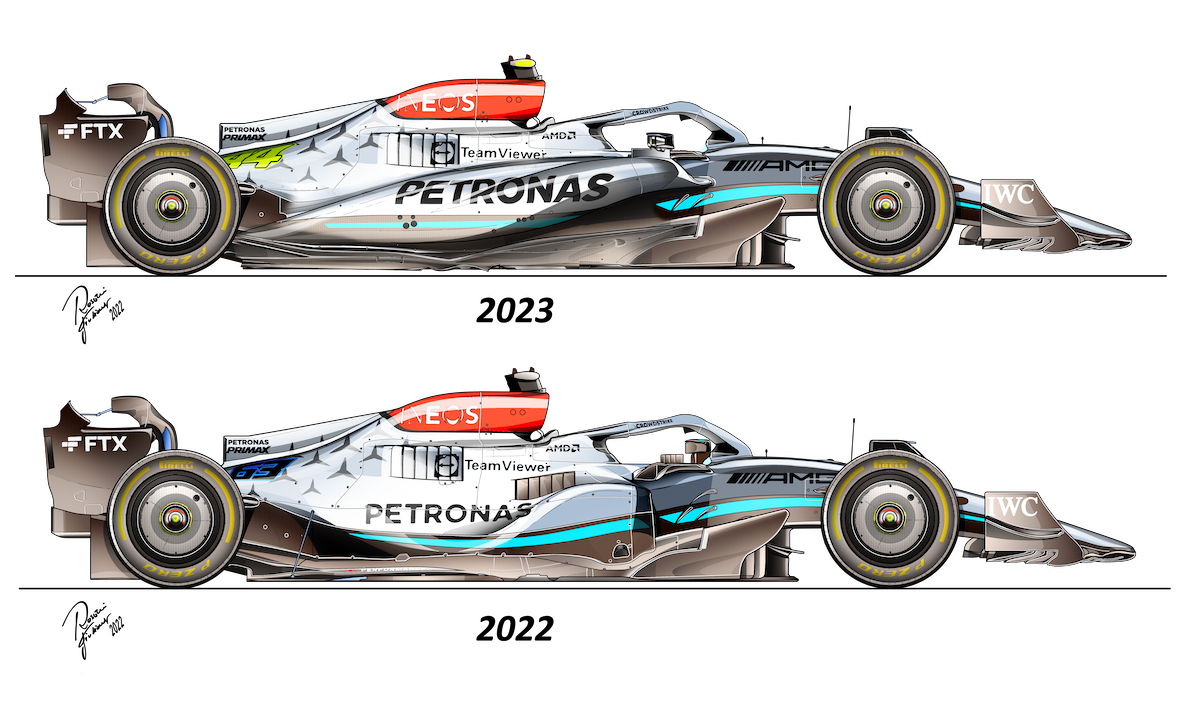 The simulations have always been exceptional according to the aerodynamics of the Anglo-German team, only to find themselves on the track with different data. It took time to understand how to find performance in a much smaller trim window due to porpoising.

Porpoising caused many problems for Mercedes, which often found itself unable to put the car with a more rigid setup in the window. Free practice was often not enough, and the pre-set settings with which the race weekends were started were often far from the optimal operating window on the track. There was no correlation between simulation and reality.

Mercedes has devoted much of the 2022 season to fighting porpoising, without having to lift the car too much off the ground. One of the “weak points” of the W13 was that it could only function properly with a floor close to the ground. Red Bull, on the other hand, having foreseen the porpoising problem in advance, has developed a RB18 capable of working well with venturi channels even with greater ground clearance.