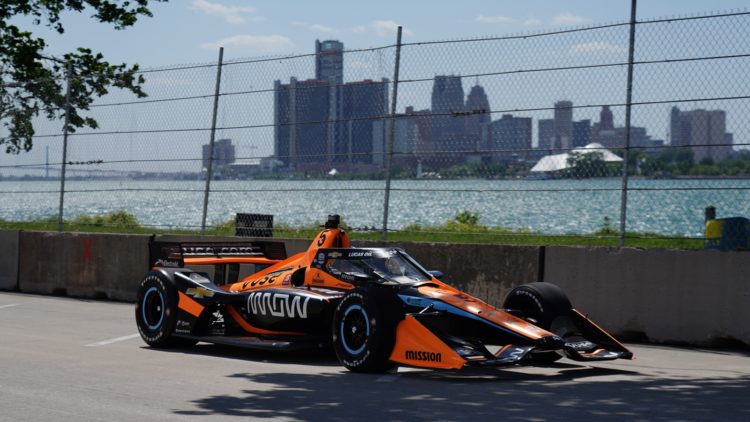 GM Renaissance Center, the site of the new track, can be seen from Belle Isle. Photo: Kevin Dejewski

This weekend hosts the final racing events scheduled around the Belle Isle street course in Detroit, with races next year scheduled to be run downtown instead.

The new location represents a major change, as the event in its current form has been a favorite of fans and drivers since IndyCar began racing on the island in 1992.  Sports car racing joined the festival weekend in 2014.

The tricky layout, bumpy concrete, and iconic fountain have all worked their way into the hearts of many IndyCar drivers over the years.

Pato O’Ward, who took victory at Belle Isle last season, described his feelings about racing on the 2.35-mile course for the final time, echoing what many drivers have been saying throughout the weekend.

“I love this place,” said O’Ward.  “I’m going to miss Belle Isle.  Feel like it’s a place that has a lot of character.  I always say it.

“If you were to describe the IndyCar Series, I think this track describes it the best.  It’s very old school, very raw.  Lots of commitment has to be from the driver’s side to extract a lap from this place.

“Yeah, it’s a really cool place.  Sad to see it leave.  But I know a lot of people are very excited for downtown Detroit.  New tracks are always really cool.  Looking forward to that.”

IndyCar raced in downtown Detroit for a few years before moving to Belle Isle 30 years ago, but the new course will have a completely new layout.

With the circuit set to completely encircle the iconic GM Renaissance Center, the race will be even more symbolic of Chevrolet’s involvement in the series than it is now.

The hope is that the new track will become as loved by fans and drivers as Belle Isle has, but only time will tell if that will be the case.