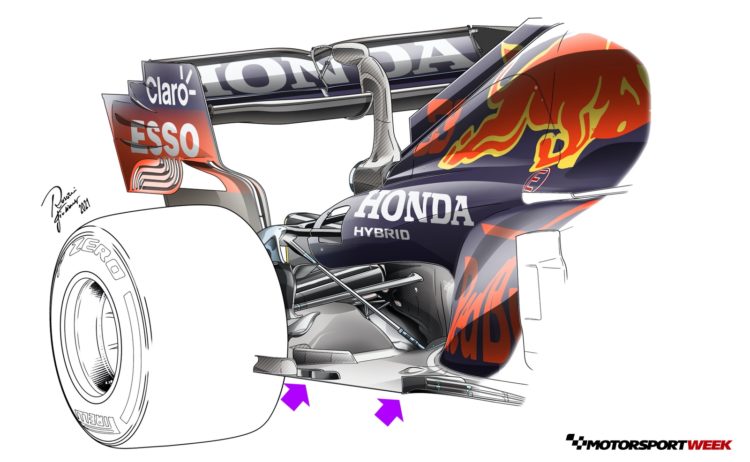 Red Bull’s RB16B has proven itself as the quickest car in the opening two races of the 2021 Formula 1 season, taking pole position in Bahrain and the victory at Imola. Only a strategic error in Bahrain cost Max Verstappen the win, whilst the pole alluded the Dutch racer at Imola after a mistake in Q3.

It’s not quite the dominance Mercedes has enjoyed in previous seasons, but we’re set for a thrilling season between Lewis Hamilton and Verstappen, who seem to be in a league of their own!

The Milton Keynes single-seater looks to have been one of the least impacted by the 2021 regulatory changes, which mandated a cut to the floor and changes to the diffuser. Unlike Mercedes, the RB16 and its successor has always adopted a high-rake set-up, which is a concept that’s less affected by the new rules.

But despite what seems a small advantage, Red Bull know they must continue to push the development of their car if they’re to take home their first world championship since 2014. They can’t rest up knowing Mercedes will also be pushing hard, having already recovered a lot of ground since pre-season testing.

The looming technical revolution of 2022 means that many teams, especially the low-ranking ones, have already put a lot of their technical focus onto next season. An example is Haas, which has not even spent the two development tokens available to modify homologated parts for the VF-21, instead opting to put 100% of its focus on next year.

For Red Bull, however, having a car capable of fighting for the championship in its hands, it cannot afford to slow down the development of the car. While it is true that from mid-season onwards the development curve always tends to flatten, Red Bull and Mercedes could become locked in a development race through to the very last race given just how close it is, but might this come at the cost of 2022, which is a clean slate in terms of development?

On the aerodynamic front, the Adrian Newey-designed car seems to show supremacy over the Mercedes W12, which doesn’t seem to enjoy the same rear stability of the RB16B.

At Imola, the car of Verstappen and Sergio Perez saw further aerodynamic changes in the floor area, where all the various vortex generators have undergone slight changes in shape. Important innovations have already been seen in Bahrain, with the adoption of a “Z” floor, which allows for an edge more parallel to the bodywork. To this, the shape has been revised with a series of vortex generators placed from the beginning of the cut onwards, trialled during pre-season testing and adopted at the first race in Bahrain.

Although they missed out on the victory in Bahrain, things turned in their favour in Imola, with a first victory in adverse conditions due to the initial rain. On the Italian circuit, in addition to various aerodynamic adaptations, the bottom has been slightly revised with regards the series of deviators. The CFD study made it possible to improve the overall fluid dynamics of the floor, to increase the outwash effect on the outside of the rear wheel.

There also seems to be a definitive correlation between track and simulator data, which would allow the development of Red Bull’s 2021 single-seater to be correctly addressed. All these factors suggest how Christian Horner’s team can really continue the development of their car even after the summer, when by now most of the teams will be focused on 2022.

The team will however need to balance that with a look to 2022, as compromising next year and beyond for a sole championship push this year, could prove a very costly mistake.

The battle with Mercedes will be tight all season, as despite an aerodynamic advantage, Mercedes looks to enjoy a power advantage despite the hard work carried out by Honda to get its power unit to a similar level.