by Rosario Giuliana
A A
2 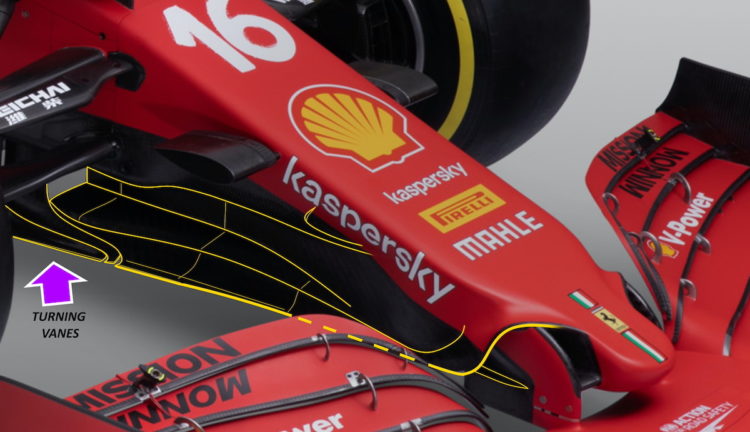 The SF21 has finally been unveiled, the car with which Ferrari is pinning its hopes on for the 2021 Formula 1 season following what can only be described as a disastrous 2020 season for the Maranello outfit.

The technicians led by Mattia Binotto know that there are no guarantees of a recovery this year given the various technical freezes which have strictly limited development and therefore the ability to regain lost ground, but that certainly hasn’t stopped them from trying.

Although on a visual level the new SF21 does not differ much from the previous SF1000 – it is clearly an evolution in almost every aspect – there are some standout developments.

What’s changed at the front?

The Ferrari SF21 inherits directly from the SF1000 components such as the chassis and the front suspension, which remain practically unchanged. Other components homologated last year are present, such as the front impact structure which is the reason Ferrari hasn’t adopted the new ‘narrow nose’ trend which has spread throughout the grid and first pioneered by Mercedes.

This would have meant spending precious development tokens, which the team confirmed last year would be spent on the gearbox.

However, while keeping the wide nose concept of the SF1000, the area dedicated to the management of the aerodynamic flow has been revised quite heavily, with the adoption of a large cape that joins the turning vanes placed under the body.

The front wing, on the other hand, is quite different from last year’s last specification, and has particular differences in the five elements, while remaining faithful to the concepts of the old single-seater.

It is clear that there has been a return to a greater outwash philosophy, just as there was on the SF90 from 2019. To accentuate this effect there is the appearance of endplate drifts inclined towards the outside of the upper part. A solution that we appreciated on the Mercedes W12 during its presentation last week. The endplate has also been revised on the side edge, here too it recalls Mercedes aerodynamic lines.

Remaining with the front axle, you can see the new front brake ducts, very different from those of the old car. The air intakes have a swelling in the lower area, especially showing the innumerable internal fringes, which separate the flow of air conveyed into the discs and caliper.

As previously mentioned, the front suspension remains faithful to that of last year, with internal elements that cannot be changed due to their homologation. Not even the wishbones have undergone any particular updates, and Scuderia Ferrari remains the only team (together with customer Haas) to adopt a single bracket. All the other teams have adopted the double bracket solution, with the pivot acting as a rise between the hub holder and the upper triangle.

In the area just behind the front wheels you can see the first interesting innovations concerning the bargeboards, which appear to be a direct evolution of those adopted at last year’s Eifel GP – the “roller shutter” (arrow) flow diverters appear for the first time on the Ferrari.

The various vertical “knives” (circled) have been revised, while the double boomerang remains in the upper area.

The first technical secret was possible to observe in the video published by Ferrari in which the vinyl sponsor logos were applied to the bodywork.

A blow-hole was seen inside the flow diverter placed in a column between the upper part of the floor and the deformable structure.
In the image the blow-hole is outlined in yellow, while in the lower part of the floor/splitter (circled) you can see the many vortex generators which are of a far greater number compared to 2020.

In any case, this solution is already present in F1 on other teams, even if revised or re-interpreted; this is the case of the aerodynamic elements above the front part of the chassis (below), which are a mix between the Mercedes solution (for the shape) and the Alfa Romeo solution (for the number of elements).

The most revisited area (aerodynamically), compared to the old car, is certainly the central area which includes the rear part of the chassis and bodywork. The air intakes for cooling the radiators are similar to the concept of last season – also due in part to the homologation of the chassis and the cooling system.

However, Ferrari seems to have taken inspiration from Red Bull for this area of the car, with the inlet sharing a very similar shape and silhouette found on the Red Bull RB16 and RB16B.

Still on the subject of cooling, it is possible to observe the new air scoop, to which “ears” have been added that bring air to the oil intercooler, making the intake more rounded and not triangular like on the SF1000. The central intake, on the other hand, is the one that brings air to the cylinders and the compressor, and which also has an inlet in the lower part of the roll bar, just above the headrest.

What stands out most in this middle area is the how the new sidepod conforms around the engine internals, creating a strong downwash effect. This solution, also called the coanda effect because it forces the air to descend towards the floor, is a popular concept on the grid.

This solution helps to increase the flow of air towards the floor and diffuser, allowing it to generate more downforce. The adoption of such a sloping bodywork may have forced the technicians to reposition the radiant masses, which are free from homologation constraints, even though the cooling system is subject to freezing (understood as hydraulic ducts).

The real secrets of this SF21 are hidden at the rear, as it is in this area that the technicians have decided to work to improve the weak points of the previous SF1000.

The two tokens have been spent on modifying the gearbox – redesigned in the carbon casing to make it narrower at the bottom. This obviously has aerodynamic benefit as its goal, in order to increase the distance between the bodywork and the outer edge of the floor in order to have greater efficiency in the so-called “coke bottle” area.

By changing the gearbox, the attachments of the rear suspension have also been updated, which has been adapted to the new external structure that wraps the 8-speed gearbox. It seems that the differential has been slightly raised, though to better observe this area of the car we should wait for the SF21 to hit the track this weekend in Bahrain.

The intervention to taper the rear axle has also come at the request of Enrico Gualtieri, who has overseen the new Power Unit, designation 065/6, and spearheaded the redesign to return to the performance and mechanical efficiency levels of 2019.

In fact, the new Power Unit is more compact in the rear part and in the arrangement of the exhausts. Reliability (as well as power) will be the real aspect to keep an eye on during testing in Bahrain.

In the rear of the car, apart from the winglets of the brake sockets which are shorter by 40mm as per the new regulations, there are few differences; the rear wing has a spoon main plane, supported by the classic double-pylon.

The arrangement of the SF1000’s exhausts is maintained in the central area, with a single wastegate valve extractor, placed above that of the endothermic engine. The rear wing endplates remain identical to those introduced in Sochi last year, which are very reminiscent of the trio-blown Mercedes solution. The biplane T-wing also remains virtually unchanged.

Highlighted in yellow in the image above we have the elements that make-up the new floor, shortened diagonally by 100mm by regulation. The new floor is substantially in the same configuration as the one tested at Yas Marina in free practice, when Ferrari carried out aerodynamic tests with a view to 2021.

You can see the three drifts in the middle area, plus other vortex generators in the front area before the rear wheel to reduce the effect created by the tyre squirt. This area will certainly be the most revised in terms of aerodynamics during the 2021 season.

In the drawing below, you can see the floor tested by Ferrari at the Abu Dhabi GP, which is virtually identical to the launch-spec floor of the SF21.