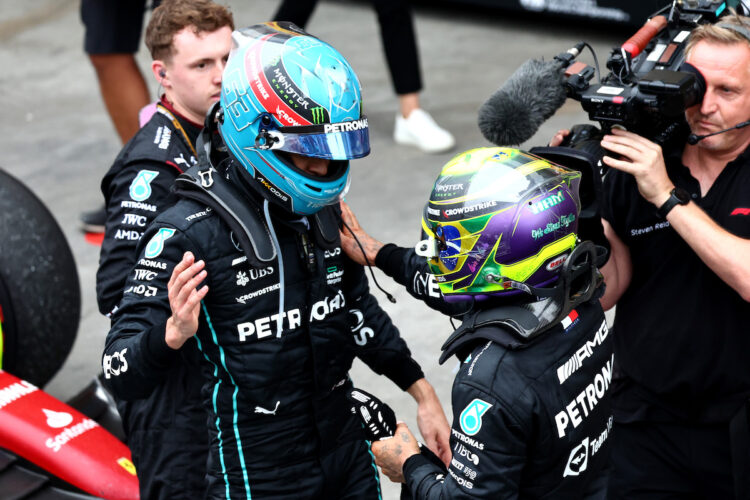 Following three years at Williams, Russell was promoted to the Mercedes F1 squad this season having been part of its junior academy for several years.

Mercedes endured a difficult campaign and was unable to contend for victory at most races, but Russell finished ahead of Hamilton in the Drivers’ Championship.

Russell took victory at the penultimate round of the campaign in Brazil, while Hamilton endured his first winless season in his F1 career.

In 2023, Tost says he expects a closer fight but believes that it will be Russell, not Hamilton, that will provide the Dutchman with a challenge.

“Such superiority as shown by Max Verstappen and Red Bull Racing this year is rather rare,” Tost told Speedweek.

“[In 2023] I expect a three-way battle between Max, Charles Leclerc and George Russell, who is already stronger than Lewis Hamilton.”

Red Bull will enter the year with limited aerodynamic testing, after it finished the season at the head of the 2022 standings.

However, it will be limited further as part of its punishment for breaching the sport’s budget cap in 2021.

“The FIA penalty will have a negative impact on Red Bull Racing, no question, even though the team has some of the best technicians,” Tost said.

“But I trust Red Bull Racing to be able to fight for the world championship title again.”

Tost backs Tsunoda to shine in 2023

Yuki Tsunoda has been retained by AlphaTauri for a third season in 2023, and will be joined by rookie Nyck de Vries.

Despite being several years younger than de Vries, Tsunoda boasts more F1 experience and will be expected to lead the team next year.

“Yuki Tsunoda has developed reasonably well, was able to improve and was faster than Pierre Gasly in the final qualifying sessions,” Tost said.

“How much he can improve will depend on him alone. I’m already expecting a strong 2023 from him.

Tsunoda’s former team-mate Gasly has switched to Alpine for next year.

“At the beginning of September it became clear that Gasly would switch to Alpine,” Tost added.

“He’s now very experienced, but in Esteban Ocon he’ll have a strong partner who already knows the Alpine team and the car very well. We’ll see how quickly he integrates there.”