Wolff: Binotto lasted longer than I thought at Ferrari 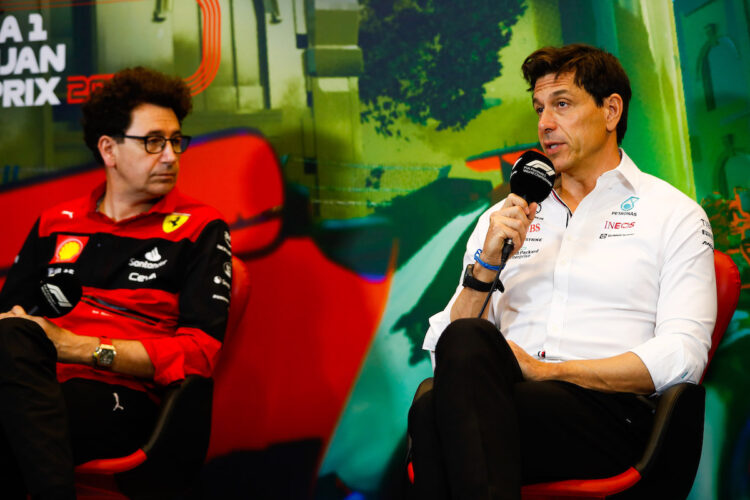 Mercedes team boss Toto Wolff says Mattia Binotto’s stint at the helm of Ferrari’s Formula 1 squad lasted longer than he thought it would.

Last month, Ferrari announced that Binotto would depart the team at the end of 2022.

Binotto has worked with Ferrari for over 25 years, mostly as an engineer.

However, he took on the role of Team Principal in 2019, having previously held the role of its chief technical officer at the Italian squad.

Ferrari has endured a difficult stint under Binotto’s reign, and was largely unable to compete for front-running positions.

However, it returned to form at the start of 2022 and appeared to be in championship contention before its season was derailed by strategy blunders, driver errors and reliability concerns.

Speaking on the Beyond The Grid podcast, Wolff admitted surprise over how long Binotto remained in the role.

“It was always clear that he was under tremendous pressure. Being a Team Principal at Ferrari, you better have a good contract for your exit,” Wolff said.

“Now, probably the unavoidable happened, but he held onto it longer than I thought.”

Wolff denied that Binotto could be on his way to aid Mercedes’ F1 organisation.

“No, I think there was too much porcelain broken between us the last two years that this would be possible,” said Wolff.

“With the other teams, I can’t say. But certainly Mattia understands Formula 1 inside out, and yeah, maybe he finds a role in another team.”

Alfa Romeo boss Frederic Vasseur has been tipped as the favourite to replace Binotto at Ferrari.

Wolff says that the role will be a tough job to take on, explaining that his successor must consider multiple factors before agreeing to the job.

“You need to understand motor racing, maybe more than just Formula 1,” Wolff said.  “But it’s such a niche where the sport, the regulations, the governing body, the commercial rights holder, the competitors, all of us are basically locked in this paddock cage. You need to be politically astute.

“It’s a very niche, specialist environment. The more you know about the sport, the better it is. But you don’t want to be a one-trick pony either.

“You can be a good racing manager, and not understand about anything that’s going on commercially or outside in the world.”