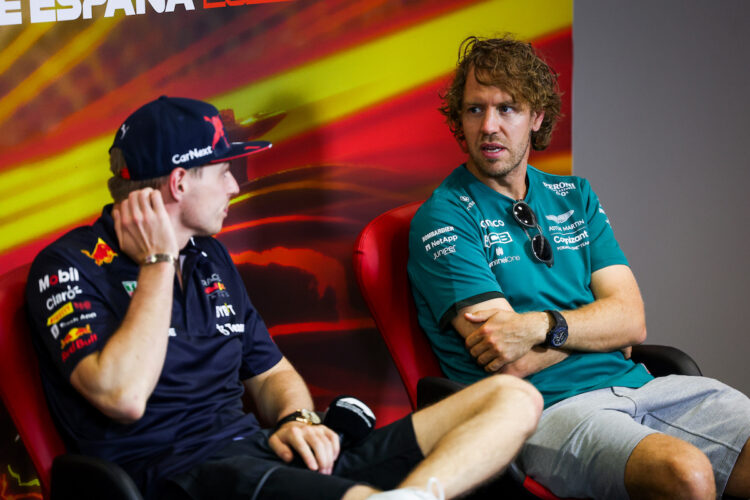 Max Verstappen has revealed that Sebastian Vettel waited at the Silverstone Circuit for him to return from hospital following his sizeable crash at the track last year.

Verstappen collided with 2021 title rival Lewis Hamilton on the opening lap of the British Grand Prix, and was pitched into the barriers at high speed.

The Dutchman was taken to the hospital for checks, before receiving the all-clear later in the evening from medical staff.

The F1 paddock was commemorating Vettel last weekend in Abu Dhabi during his final race weekend before retirement.

Verstappen says that the memory of Vettel waiting for him will stick with him forever, believing that it shows the four-time World Champion’s true character.

“One thing I will always remember for the rest of my life – last year, in Silverstone, I came back from the hospital to get to my motorhome to get all my stuff and he was there, waiting for me when I got out of the car,” Verstappen said.

“And he said, ‘Are you OK, Max, how are you doing? Are you OK?’ And that just shows how he is, you know, a super nice, caring person who is not only there for performance, but also means well, you know.

“I think that’s also really nice to be remembered like that. He will definitely be missed.

“But on the other hand, I also really wish him well for the future, whatever he wants to do, to be honest, but I think what is most important is to spend time with family.

“You know, he’s a real family, man. And that’s great to see and a great example.”

Verstappen is currently following in Vettel’s footsteps, as the two are the most successful drivers in Red Bull’s F1 history.

Prior to his departure from Red Bull at the end of 2014, Vettel dominated the early stages of the 2010s, winning four titles in a row.

“He has meant a lot to Red Bull,” Verstappen said. “He came through as a junior and basically achieved all of it in the sport.

I mean, he still has a lot of friends within Red Bull, of course all the way up. He’s had a career which a lot of people could only dream of.

“But at the end of the day, that’s not everything. I think, as a person, he’s always been very caring. Of course, I had my heated battles with him, especially in the beginning of my career.”