‘Dreamt of this moment many times’ – Russell on maiden F1 victory 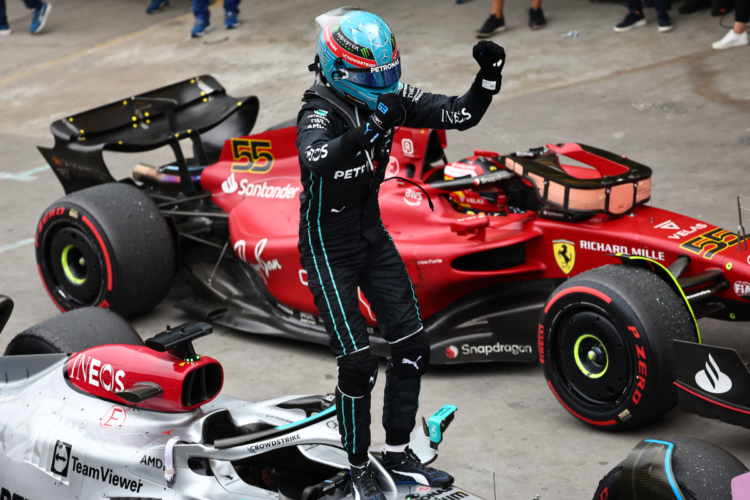 George Russell was emotional at the chequered flag of the 2022 Sao Paulo Grand Prix as the British driver lead a Mercedes one-two for his first win in Formula 1.

The win also marked Mercedes’ first win in the 2022 season, a feat which has eluded them many times throughout the season.

For Russell, it has been a long time coming since his super sub appearance in the W11 for the 2020 Sakhir Grand Prix which saw him lose out to an unfortunate string of luck.

“So many emotions,” Russell began in the post-race press conference. “Dreamt of this moment for sure, many, many times and you never really know how it’s going to pan out.

“I think the race was well managed, and everything was under control. I knew how quick Lewis was and when that Safety Car came out I thought, ‘this is going to be very tricky now’.”

After getting his first taste of victory in Saturday’s Sprint Race, he showed very strong pace to pull away from the Red Bulls and Ferraris.

When asked about how he felt in the lead-up to starting his second grand prix from the very front, Russell replied: “I think it’s all about the mentality.

“If you have the mentality of doing everything right, make a clean start, do your thing and get into your groove then you can win this race.

“I knew having Lewis alongside me, Max in my mirrors, it was not going to be a straightforward race, but we believed.

“We were having a lot of conversations this morning as a team, strategically about how we were going to tackle getting this victory for the team.

“To come away with a one-two is just unreal.”