Toyota leads 1-2 in Bahrain with 2 hours to go, Alpine third 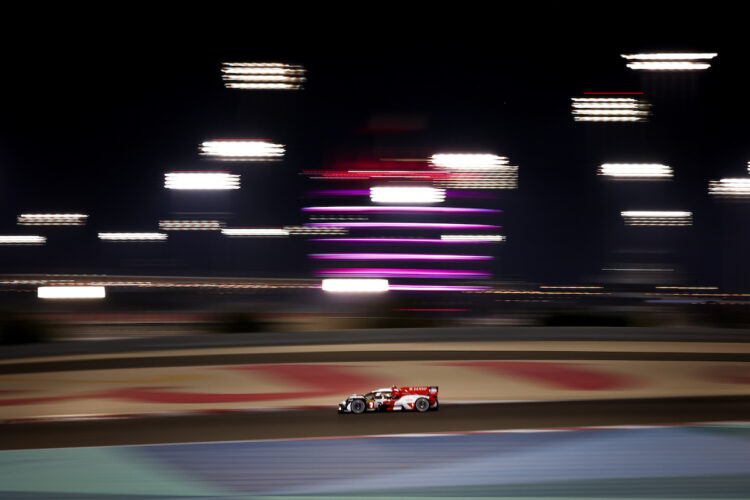 With two hours to go in the 8 Hours of Bahrain, the two Toyotas have 2 laps on the #36 Alpine A480, with the Peugeots continuing to suffer reliability gremlins.

The #93 Peugeot 9X8 was pushed into the garage just minutes ago, with the two cars fourth and fifth in class, five laps off the lead.

Kamui Kobayashi leads the race in the #7 Toyota GR010, with teammate and fellow Japanese driver Ryo Hirakawa 35 seconds back in the #8 Toyota GR010.

The #36 Alpine A480 is 2 laps behind, their hopes of championship victory fading rapidly as Matthieu Vaxiviere pedals it around the Middle Eastern track. As it currently stands the #8 Toyota crew of Hirakawa, Sebastien Buemi and Brendon Hartley would win the WEC drivers championship for Hypercars.

Nick Tandy is third, driving the #64 Corvette C8.R. The Corvette didn’t have the pace early on, but a lucky free pitstop during a full course yellow period early in the race enabled them to catch up, with Tandy doing brilliantly to hold off the two Porsches.

Speaking of the two Porsches, they are fourth and fifth in class, Gianmaria Bruni in the #91 Porsche 911 RSR-19 leading Kevin Estre in the sister #92 Porsche 911 RSR-19. They had the pace to challenge Ferrari early in theu race, but it seems the cooler temperatures do not suit the Porsche, and they’ve both dropped back even from Tandy’s Corvette.

In GTE-Am, Michelle Gatting leads in the #85 Iron Dames Ferrari 488 GTE EVO, 50 seconds to the good over David Pittard in the #98 Northwest Aston Martin Vantage AMR. Third is Matteo Cairoli in the #46 Team Project Porsche 911 RSR-19, eight seconds off Pittard.