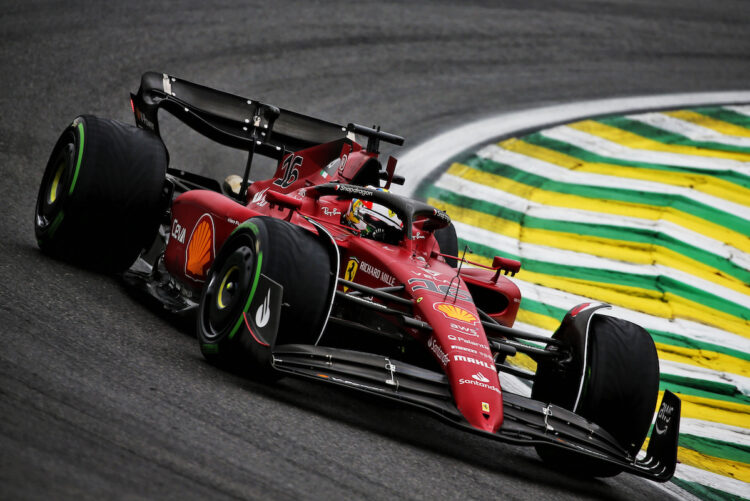 Ferrari has explained why Charles Leclerc started the Q3 session from Interlagos on the Intermediate tyre, which ultimately proved to hurt his result.

All 10 cars lined up at the end of the pit lane prior to the commencement of Q3 on Friday, with all bar Leclerc running the Soft compound.

Qualifying had started in wet conditions and throughout the session, the track began to dry out – but according to the forecast, heavy rainfall was imminent at the circuit when Q3 was getting underway.

But the rain failed to come at a time that benefitted Leclerc, with those on the slick compound noticeably faster.

Speaking after the session, Ferrari race director Laurent Mekies says the team opted to split its tyre choice, with the hope for Leclerc being that it would rain quickly and he would have the most grip available in the field.

“It was a difficult qualifying session as it was very intense for all the teams,” Mekies said. “It’s the sort of qualifying where you need to make a lot of calls.

“Some of the ones made today worked, others worked less. Altogether it’s a bit frustrating because we got both cars into Q3 and then we were confronted with a tough choice.

“On one hand you’ve got a track that is dry and there’s a golden rule that says you should go for that track if it is dry.

“On the other hand we were expecting heavy rain imminently, therefore at the end of the day we split our cars.”

Leclerc struggled for grip on his hot lap and when he returned to the pits to change onto the Soft compound, the rain began to intensify.

Mercedes’ George Russell beached his car in the gravel which caused a red flag and the delay saturated the track enough to eliminate any chance of improvements in the field, with Kevin Magnussen taking a shock maiden pole position.

“You always know at that very moment when your cars are going out that depending on the exact timing of the rain you’re going to have one happy man and one unhappy man,” Mekies added.

“That’s exactly what happened. The rain came probably a minute too late for Charles, but it was probably the right timing for Carlos who was second on track.

“Altogether it is the way it is, P5 and P10. It’s the start of a long weekend with both the 100km tomorrow and 300km on Sunday, so we will be fighting back to get back to fight for better places.

“We seem to be in a slightly better place compared to what we were seeing last weekend in Mexico, so let’s see.”

Leclerc will start Sunday’s sprint race from 10th on the grid.