Hamilton: Las Vegas GP could be the ‘best F1 race of all time’ 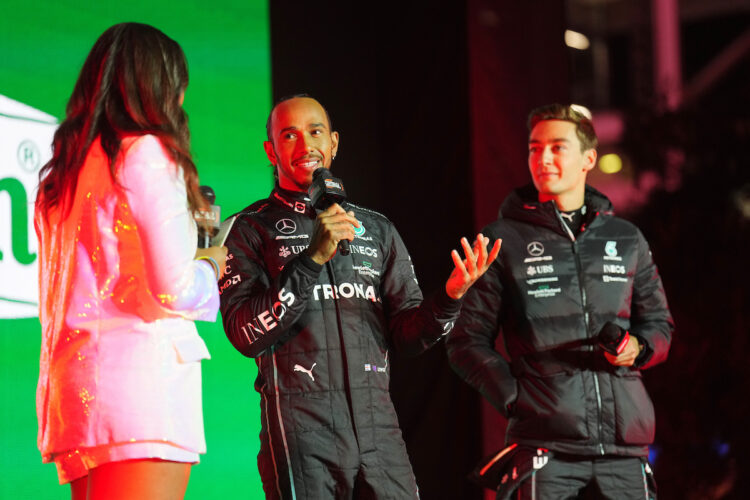 Lewis Hamilton believes that the Las Vegas Grand Prix in 2023 has the potential to be the best race event that Formula 1 has ever produced.

Las Vegas will host the penultimate round of next year’s campaign, with a new track layout being created through the city famous for its party lifestyle.

It will be one of three US-based races held in 2023, and is currently receiving substantial investment from F1, who is the promoter of the event.

Last weekend, a launch party was held, one year prior to the first grand prix at the venue. Lewis Hamilton, as well as Mercedes team-mate George Russell, were present to promote the event.

“I’m so excited to be in Vegas,” Hamilton said. “Just driving down that strip, watching movies like so many of you have seen [set] in Vegas, the lights… this race could for sure be the best race of all time.”

While Hamilton says that Mercedes is determined to come out of the event on top, he says he hopes to enjoy the lavish culture of the city while he’s there.

“We have races in Singapore, Monaco is pretty hectic,” he said. “It’s definitely not going to be easy [to stay focused].

“But we’ll be here to try and win the race, but hopefully we’ll get to enjoy what this city has to offer.”

The track features 17 corners, but also consists of long straights that are set to enable close wheel-to-wheel racing.

While Russell admits that it won’t be the most exciting circuit to drive, he believes that the race itself should make for exciting viewing.

“I think it’s super exciting, this race,” he said. “It’s wild already. This time next year is going to be crazy. I can’t wait for it.

“I don’t think this is going to be the most exciting one to drive, but for you guys watching, I feel like this race is designed for good racing, for overtakes and entertainment.”