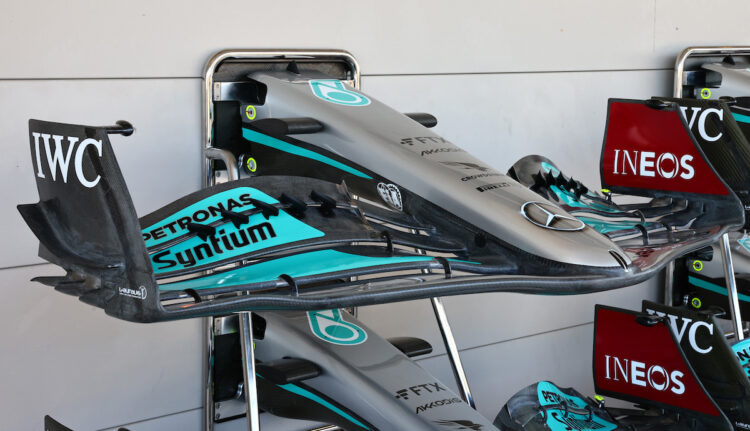 Mercedes have confirmed they will run their new front wing upgrade during this weekend’s Mexican Grand Prix, after opting against doing so in Austin last weekend.

The wing, which was displayed outside the teams garage during the United States Grand Prix build-up, was never actually used. It was thought that was because rival teams had indicated that they would protest the design, should Mercedes actually use it.

However trackside engineering director, Andrew Shovlin, has confirmed the real reason they didn’t run it was because they only had one available. Had a driver damaged it heavily during qualifying, requiring a replacement, it would have meant a pit lane start as all items must be replaced like for like during parc ferme conditions.

“The reason we didn’t run it in Austin was because we only had one of those parts so if we damaged it during qualifying it would have meant the car that damaged the wing had to start from the back,” explained Shovlin.

“Also with a very busy programme we had the tyre test in FP2, we didn’t actually have the time to evaluate [it].”

Shovlin says Mercedes intends to run the wing in practice on Friday in Mexico, and should it prove successful, will run it in qualifying and the race.

“We have more of those parts available in Mexico, we will run that on the Friday, we will check if it is all working as expected and the plan at this stage is to race that wing.”

The controversy surrounding the wing comes from the small vertical fins that connect the two elements (as seen in our illustration above). These exploit a grey area in the rules, a loophole which Mercedes believes permits such fins for aerodynamical purposes. Whereas rival teams disagree and have sought clarification.

“I think there’s an argument to be had,” technical director Mike Elliott said of the design, adding: “Whether we want to have it as another question.”