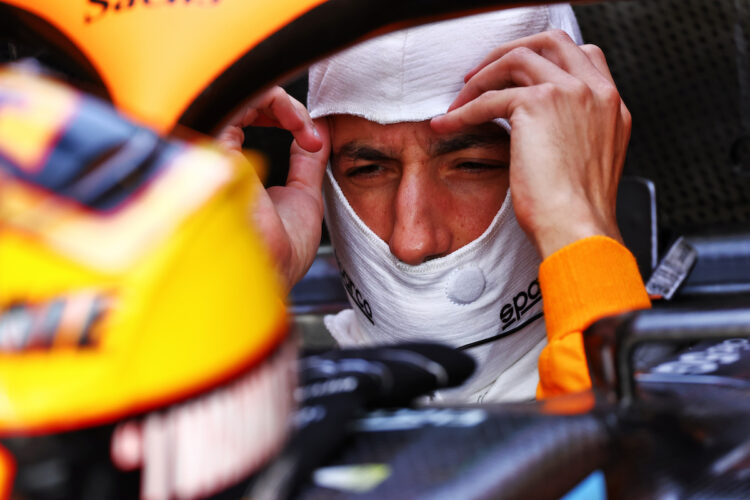 Daniel Ricciardo has ruled himself out of taking on a drive at the Haas Formula 1 team in 2023.

The US-owned squad is yet to confirm who will partner Kevin Magnussen next year, with incumbent Mick Schumacher and Nico Hulkenberg believed to be the front-runners.

Ricciardo has opted to depart McLaren one year prior to the conclusion of his contract amid a period of underwhelming performances.

He endured a difficult race last time out in Austin, Texas, and was evidently dejected after the grand prix.

Williams is set to sign Logan Sargent for 2023, provided the American driver secures a Super Licence following the Formula 2 round in Abu Dhabi.

It leaves just Haas as Ricciardo’s only option to race full-time in 2023.

But when asked by Viaplay if he was considering a drive at the team, Ricciardo said: “To be honest, no.

“Everything that’s happened this year with let’s say the McLaren situation, for sure it was hard to prepare for that, but we’ve been putting a plan in place with myself and my team.”

He has been linked with Mercedes, as well as a possible return to former team Red Bull as a third driver for next year.

“It’s now just trying to set myself up for success I’d call it in the long term,” Ricciardo added.

“So with that next year will look different, but it’s really just trying to set myself up to be back at the front of the grid and fight for wins, which I know I can do.”

Haas has remained coy over who will fill its second seat in 2023, with several drivers linked to it over the last several months.

Schumacher was given an ultimatum of scoring points in the second half of the season to ensure he remained with the team beyond the current campaign.

He has not finished inside the top 10 since the Austrian Grand Prix earlier this year, where he took a career-best result of sixth.

Hulkenberg, who is currently carrying out duties as Aston Martin’s reserve driver, has also been linked to the vacancy.

Haas team boss Guenther Steiner said in Texas last week that a decision over its 2023 F1 line-up would likely be made prior to the Mexico City Grand Prix, which takes place this weekend.