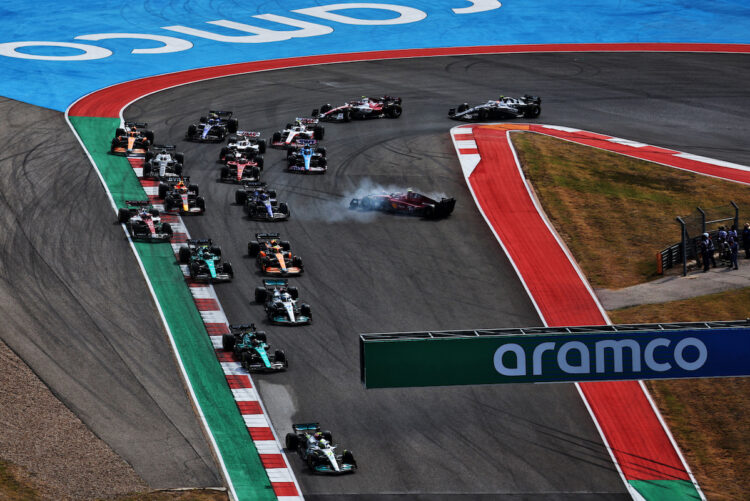 George Russell has accepted blame for colliding with Carlos Sainz on the opening lap of the US Grand Prix on Sunday.

Sainz, who started the race from pole position, was hit by Russell on the exit of the first corner, which forced him to retire from the race.

The stewards deemed Russell at fault for the incident and handed him a five-second time penalty for the collision, which he served during a pit stop.

Russell issued an apology to Sainz shortly after the chequered flag.

“Firstly, apologies to Carlos, you never want to be involved in an incident that ultimately destroys somebody else’s race,” he said.

“When I attacked Turn 1, I was focused on the three cars around me and I was expecting Carlos to try and fight it around the outside of Max, so I braked quite deep into the corner.

“When I saw he tried to cut back underneath Max, it was already too late for me there. I couldn’t avoid the incident, so hands up from my side, I should’ve been aware of that possibility.”

“From there on in, a really miserable afternoon for me,” Russell said. “I’ve been off the pace all weekend.

“I know we had some damage, so that will give me a bit of peace of mind this evening if that damage turns out to be more than we first expected.

“As soon as I recognised we were out of striking range of a better position, it was a matter of fact of trying to bring the car home.”

Toto Wolff confirmed after the race that Russell’s front wing damage was significant following the contact with Sainz.

“The way he t-boned him, we were surprised that it was not a DNF,” Wolff said. “We’ve just seen the front wing, it’s massively damaged.

“Not only the front wing endplate, but the below [part], that’s the aero critical part. He had a car that was not capable of doing more.”