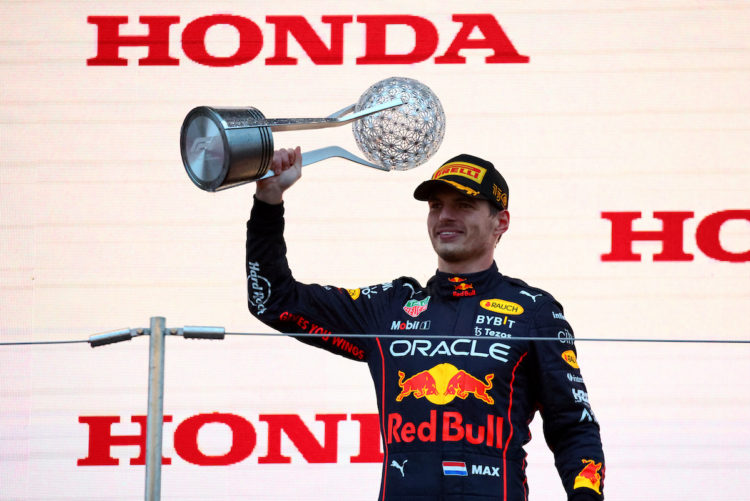 Max Verstappen has been crowned the 2022 Formula 1 World Champion after winning a shortened race at the Suzuka Circuit.

The Dutchman officially claimed the title when Charles Leclerc was handed a five-second time penalty in the minutes following the chequered flag.

Although the race was shortened, F1’s rules state that staggered points can be applied “if a race is suspended in accordance with Article 57, and cannot be resumed”.

As the race officially got back underway after the red flag, the FIA deemed full points applicable in this situation.

Verstappen was told during the post-race parc fermé interview that he was the champion, allowing him to celebrate with his team.

When the race initially got underway, Intermediate tyres were used throughout – but on the opening lap, Carlos Sainz lost control and spun into the wall.

The race was subsequently red-flagged due to the conditions, with the pause dominated by talk regarding a tractor on the circuit.

The recovery vehicle had been sent out to deal with Sainz’s accident, however it ventured to the circuit while the cars were rotating around the circuit.

It caused outrage from several drivers, including Pierre Gasly, who passed the vehicle at high speed following a pit stop at the end of lap one.

The race was delayed for over two hours, and when the cars were instructed to return to the circuit for a rolling start, the Wet compound was mandated.

Verstappen streaked clear of the field and held a lead of 26 seconds over Leclerc at the chequered flag.

Sergio Perez hounded Leclerc during the final laps for second place, but couldn’t pass the Ferrari driver for the position.

At the final chicane on the last lap, Leclerc cut the corner after making a mistake, with Perez accusing the Ferrari driver of pushing him off as they went side-by-side through the final corner.

The FIA indeed deemed Leclerc drove illegally, issuing him a penalty that dropped him to third in the official classification.

There was a similar situation behind them, as Lewis Hamilton ran behind the rear of Esteban Ocon after the race restart.

However, the seven-time World Champion couldn’t pass the Alpine driver, and ended the race in fifth.

Sebastian Vettel was sixth despite spinning on the opening lap, making an early call to switch to the Intermediate tyres shortly after the restart.

All drivers would eventually follow him in, however the time he gained through the earlier stop propelled him into the points, after he spun on the opening lap.

Fernando Alonso was seventh, using his pace advantage on fresh tyres at the end of the race to skate through the lower end of the point-paying positions.

George Russell was eighth in the second Mercedes, ahead of Nicholas Latifi, who scored points ahead of his upcoming exit from Williams.

Lando Norris rounded out the top 10.