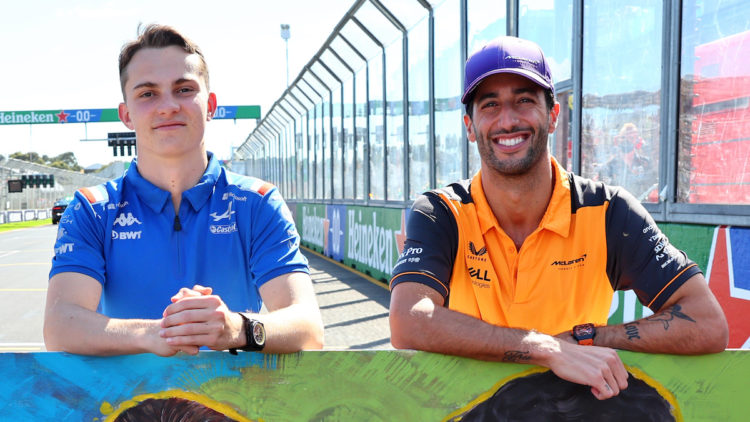 Incoming McLaren Formula 1 driver, Oscar Piastri, has revealed that fellow Australian and the driver he will replace at the British team, Daniel Ricciardo, made contact with him to say there were no hard feelings.

Piastri was involved in a game of tug-of-war after both Alpine and McLaren announced he would drive for them in 2023.

Alpine, which has nurtured the 21-year-old through junior formula, wanted to place him at Williams next year, but following the surprise departure of Fernando Alonso, quickly moved to announce the Australian as Esteban Ocon’s team-mate.

Meanwhile McLaren signed a contract with Piastri to replace the underperforming Ricciardo. The matter even went to court, with McLaren coming out on top.

The whole debacle has left Ricciardo on the sidelines with the eight-time race winner yet to find a seat. However he hasn’t directed any ire towards Piastri, with the rookie confirming the two have spoken after Ricciardo reached out.

“That was a really great thing for Daniel to get in touch,” Piastri told the In the Fast Lane podcast.

“I was planning on getting in touch myself, but I think with the timing of things, he was obviously at a race and, quite frankly, I didn’t actually know if he wanted to hear from me. I was trying to think of what to say, but he beat me to it.

“A true professional, Daniel is. My respect for him was already extremely high and it’s only gotten higher in the way he’s responded.”

Piastri says the fact Ricciardo, who is a widely liked driver in the paddock and with F1 fans, reached out and made it clear there were no hard feelings, has made things easier for him.

“With him getting in touch like that, it was great for me personally,” he added. “Knowing that there’s no hard feelings, that really helped me quite a lot – it was a nice moment.

“I think if I can get close to emulating [the] success he’s had on track, and also the character he is off the track, then I think I’ll be doing a reasonable job.”