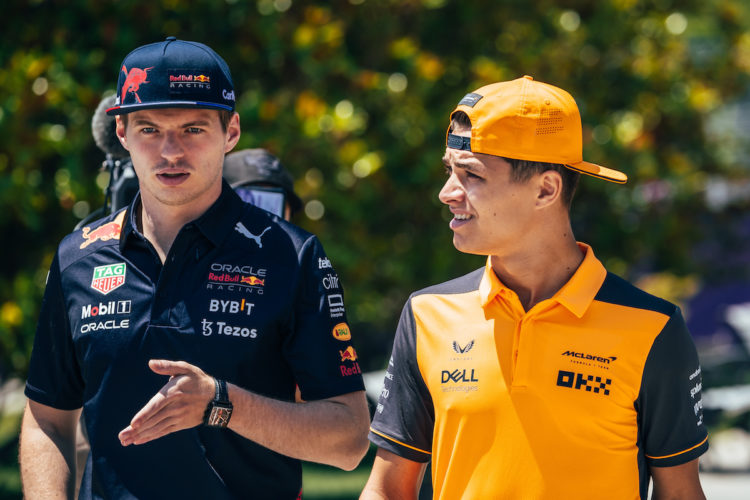 Lando Norris has heaped praise on fellow Formula 1 driver Max Verstappen, claiming that he is “one of the most talented drivers” to ever enter the sport.

Verstappen is on course to reach his second F1 title this year, and could clinch it at this weekend’s Singapore Grand Prix.

The Dutchman has 31 victories to his name, placing him inside the top 10 most wins of all-time list.

He is currently dominating the 2022 season, taking 11 race victories so far in the campaign.

“He’s done a pretty good job – he should maybe have a go in our car and see what it’s like,” Norris joked to Sky Sports.

Verstappen’s form this year has led Norris to compare it to that of Lewis Hamilton, who dominated the sport for several years prior to Verstappen’s title success.

“He’s done amazing [and has been] very impressive. Similar to Lewis in previous years,” Norris said.

“He is one of the most talented drivers ever to come into Formula 1, one of the fastest. No doubt he is going to win his second [title] this year and most likely, he will go on to win a few more in the future.”

Norris says that he is impressed with Verstappen’s ability to find the limit of the car from the early stages of the grand prix weekend, while others gradually increase their pace.

“Even in FP1, FP2, FP3, he’s never under the limit, he’s always pushing the limits,” added the McLaren driver.

“Even FP1, the first lap of the whole day, his lap times are normally quicker than what we ever do in qualifying.”

Verstappen is currently tied to Red Bull on a long-term deal, which doesn’t expire until the end of the 2028 campaign.