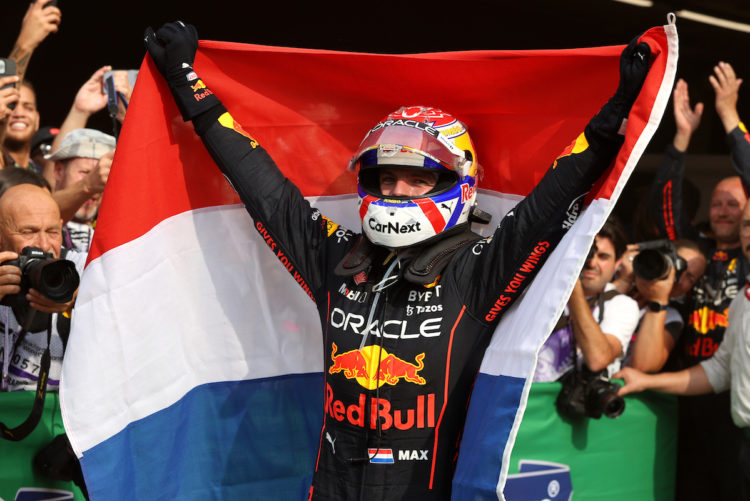 Max Verstappen prevailed at the Dutch Grand Prix in front of his home crowd, further extending his lead at the top of the Drivers’ Championship.

Verstappen started the race from pole and retained the lead in the early stages of the grand prix, only relinquishing it when he made his first pit stop.

It left the Mercedes pair of Lewis Hamilton and George Russell out in front, as they opted to start on the Medium tyres rather than the Softs.

After they made their pit stops, both Mercedes drivers displayed strong pace on the Hard compound, which left them in a strong position later in the race when a Safety Car was called following a stoppage for Valtteri Bottas.

Verstappen and Russell switched to Soft tyres in second and third, while Hamilton stayed out in front on Medium tyres, which he fitted during a Virtual Safety Car earlier in the race.

The Virtual Safety Car in question was deployed amid a bizarre incident for Yuki Tsunoda, who stopped on the circuit, before returning to the circuit. After being sent back onto the track, Tsunoda stopped once again and retired from the race.

Verstappen wasted no time overtaking Hamilton, doing so on the run to Turn 1 at the Safety Car restart, and from there, he was untroubled.

He now holds a 109-point lead in the Drivers’ standings, having taken his 10th race victory of the 2022 season.

Russell followed suit soon after, however the team-mates came close to making contact at high speed on the start/finish straight as Russell completed the overtake.

Hamilton then dropped off the podium as Charles Leclerc, on fresher Soft tyres, made his way past the seven-time World Champion.

Hamilton held on to fourth place, as behind him, there was a late-race battle for fifth place between Carlos Sainz and Sergio Perez.

Perez attacked the Ferrari driver and drove off the circuit at Turn 2 amid their battle – however a five-second time penalty issued to Sainz for an unsafe release in the pit lane put a swift end to the importance of the fight.

Sainz dropped to eighth place when his penalty was issued, behind the Alpine of Fernando Alonso and the McLaren of Lando Norris.

Esteban Ocon was ninth, while Lance Stroll secured the final point on offer for Aston Martin.