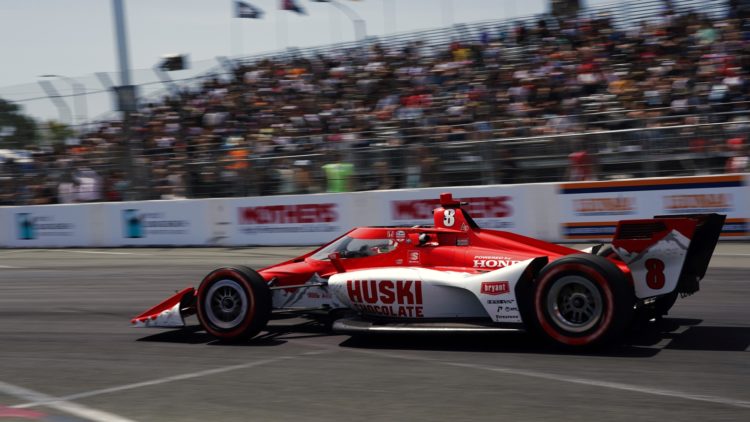 Ericsson was running in the top 10 before he touched wheel with Grosjean. Photo: Kevin Dejewski

Following an on-track disagreement at the recent race from Nashville, Marcus Ericsson and Romain Grosjean have cleared the air ahead of this weekend’s race in Gateway.

The two former F1 drivers came together on the tight street course, and a short time later Ericsson lost drive in his Chip Ganassi Racing Honda, which dropped him far down the order.

After the race, the Swede took to social media to tell Grosjean ‘What goes around comes around’ in reference to his rival’s crash that he suffered with only a few laps remaining.

The two veteran drivers have spoken since then, however, and hold no hard feelings going into this weekend’s short oval race.

“It went well,” said Ericsson about the conversation.  “It was good to talk to him after.  I felt that maybe he had been a bit over-aggressive with me.  We talked about that.

“When I look back at it, I don’t think he did anything wrong particularly in that situation.  But obviously he has been in a few incidents over the season.  That’s racing, right?

“There was some drama with people talking about things after the race, but that’s good for the sport at the end of the day.

“It was frustrating for me to get taken out there at the end of the race.  That was tough for me to accept because if I had just finished in the top five or six, I would be leading the championship again.  It’s a bit frustrating, but that’s racing.”

As a result of the poor finish, Ericsson dropped down to third place in the championship standings.  He only sits 12 points behind Will Power, but would prefer to be in control at the top of the list.

He will have a tough task ahead of him to gain ground, as Power is historically very tough to beat on ovals and finished on the podium at Gateway last season.