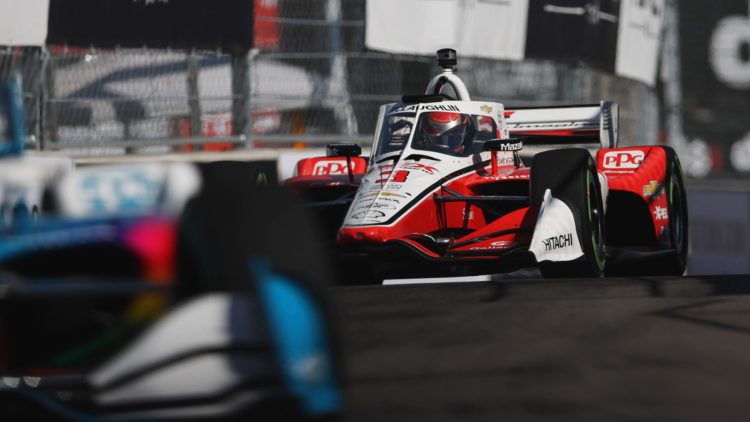 McLaughlin made up 13 positions in the closing laps to earn a podium finish. Photo: IndyCar

Following a rare slow pit stop by his Team Penske crew that lost him quite a few positions, Scott McLaughlin was forced to restart the Music City Grand Prix from 15th position with 25 laps to go.

The daring Kiwi spent no time making the positions back up, however, and was able to move up four places in the first green flag lap alone.

By time five laps had passed, McLaughlin was back up to seventh, and he didn’t stop there.  A couple more late restarts allowed him to carve his way all the way up to second, where he nearly pipped Scott Dixon for the win.

Speaking after the eventful race was over, the second-year IndyCar driver described how much fun it was to dive through the field in the closing laps.

“I was just pissed off [after the slow stop], so I just dropped the hammer,” said McLaughlin. “I felt like the seas parted on the restart, and I passed all these cars. Jeez.

“I was quickly in eighth, and then there was another restart, and I passed two more, and another restart, passed a couple of more.  Passed one guy on the last one, and I’m like, ‘Come on Scotty, let’s go.’

“Even though it didn’t work out in my favor, one of the most fun races of my career in one of the best race cars I’ve ever had.  The car was so good.  I had so much fun.

“Yeah, the cautions and stuff were a bit inconsistent – you get into a rhythm, and then you stop, and then you have to restart again.  But to battle one-on-one with Scotty [Dixon] right where…

“In Texas last year I didn’t really battle with him, I just wanted to bring him home in second. Today I had a full go with him, and it was awesome.  That was probably one of the top three best things of my career to date, that race.”

The podium boosted McLaughlin from seventh to sixth in the points, and allowed him to close the gap to Power at the front.  With only three races remaining and 58 points between him and leader, however, it will be a tough ask for the Kiwi to win the title.

Even so, he feels confident about the tracks that are still upcoming on the calendar, and now has plenty of momentum to build on for the final push of the season.