by Kevin Dejewski
A A
10 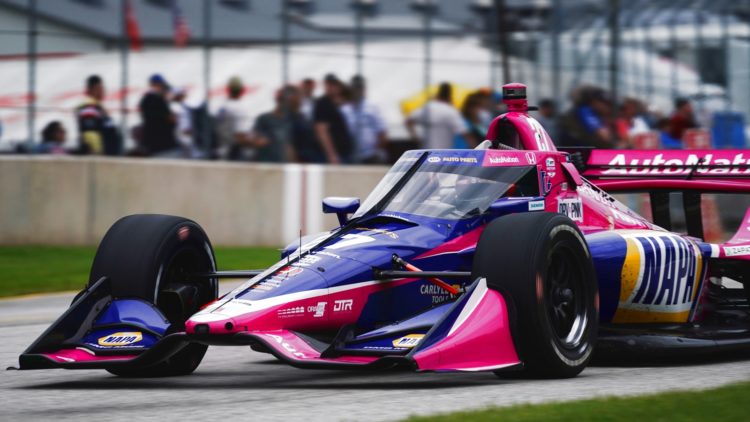 Rossi is allowed to keep his win, but was fined 20 points for the infraction. Photo: Kevin Dejewski

Alexander Rossi and his Andretti Autosport team have been fined and penalized 20 points after officials discovered an illegal ballast solution on the #27 entry following the recent race on the Indianapolis road course.

Rossi’s race-winning car fell afoul of the minimum weight requirement, which describes the way in which the car’s weight is calculated and that the total must meet or exceed 1700 pounds.

The weight of the car itself was above the minimum, but the way in which the team used the driver drink bottle as ballast was not allowed. The drinks bottle is specifically excluded from the weight calculations in the rules.

The discrepancy was discovered in IndyCar’s post-race inspection, and was announced on Wednesday in the lead-up to the Music City Grand Prix from Nashville.

“From a technical perspective, the way they achieved the weight is not allowed.  To meet minimum weight, the drink bottle and its contents were used as car ballast, which is not permitted and why the team is being fined and penalized.”

Rossi has been docked 20 driver points and the team has been penalized a matching amount on championship points.  Andretti Autosport has also been fined $25,000 for the infraction.

The win was not taken away from Rossi, who earned his first victory in nearly three years during the event, and other driver’s results or points awards were not modified.

The loss of points does drop Rossi from eighth to ninth in the overall points standings, however, and promotes Felix Rosenqvist up one position in the standings.

Rossi remains as the highest placed Andretti Autosport driver in the points, and now sits just ahead of his team-mate Colton Herta.