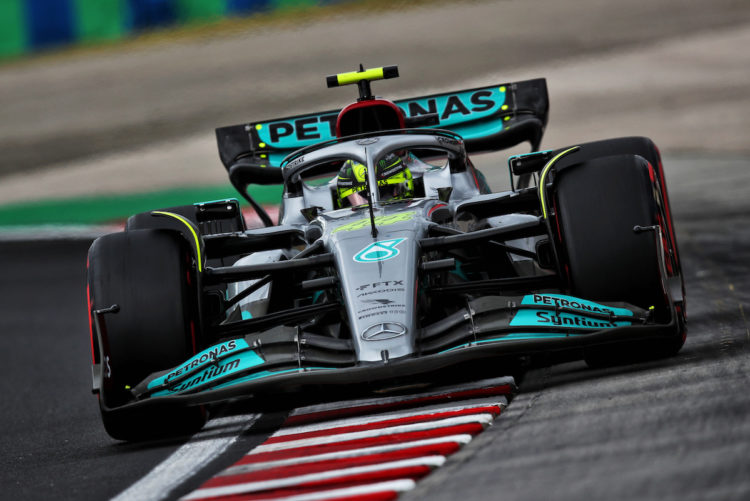 Hamilton ended the session in seventh place, almost eight-tenths of a second slower than Russell.

However, it was revealed after the session that Hamilton suffered from a DRS issue during Q3 that prevented him from maximising his lap time.

“I just had my DRS not working, otherwise huge congratulations to George, it’s an amazing feeling to get the first pole position, and it is huge for the team,” Hamilton said.

“We don’t know where the pace all of a sudden came from, it came from nowhere, that’s a huge positive.

“I’ll do what I can tomorrow to support him, he should be able to win from that position at this track, and I’ll try and work my way up.”

While Mercedes was delighted with Russell’s pole position, team boss Toto Wolff told Sky F1 that “in these moments you want to cry for joy for the pole but equally you know the car was there for him [Hamilton] to be there, so it is bittersweet”.

Mercedes has struggled for pace all through the 2022 season, as it started the new era of the sport on the back foot.

Although it has gathered a handful of podiums during the opening 12 events, it has largely struggled for one lap pace, leaving it uncompetitive in qualifying.

However, it turned a corner in Budapest, with Hamilton believing that he could’ve joined Russell on the front row if not for his DRS issue.

“For sure, for sure,” he answered when asked if Mercedes could’ve enjoyed a one-two result.

“It’s definitely frustrating to finally after all the struggles that we had, not be able to fight for the front row and do it but there’ll be other times.

“I don’t know where our race pace is going to be now because yesterday we were slow in both, but maybe all of a sudden we found something, if we have great, and if that’s for both of us hopefully we can attack tomorrow.”