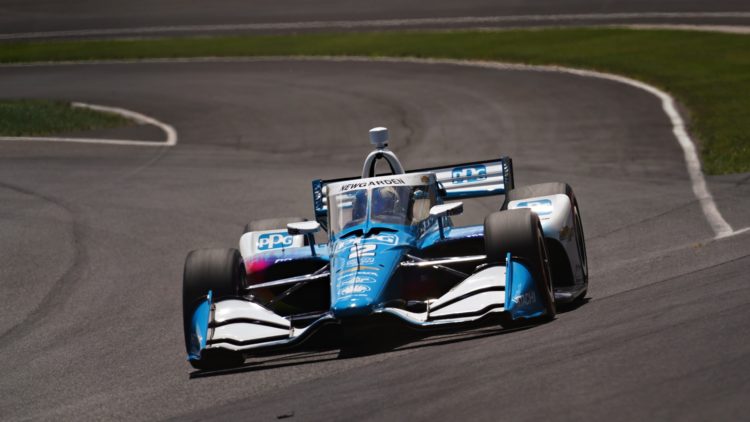 Newgarden was cleared to race in this weekend's event from IMS. Photo: Kevin Dejewski

Following a hard crash at Iowa Speedway last weekend, Josef Newgarden lost consciousness in the paddock and fell.  He hit his head in the incident, and was transported to hospital overnight for observation.

Newgarden rested throughout the week, and was cleared to race this weekend with no lingering symptoms apparent.

“I don’t want to get into too much on the medical side, but I certainly hit my head pretty hard on Sunday afternoon,” said Newgarden to a group of Media at IMS.  “Obviously, the main concern at that point is a concussion, and just trying to make sure that there’s no lingering or long term effects from that.

“Thankfully, I’m in really great shape.  I felt very good most of the week.  So I think we’re in the pretty good spot now for tomorrow.

“I can’t confirm [whether I suffered a concussion].  I don’t know that I did.  I think if you were a doctor, you’d probably say that I was concussed after Sunday night, so it’s probably fair to say that.  So then it turns into a question of how severe was it, and how long was it going to linger.

Once Newgarden was released from the hospital with nothing wrong showing up on the scans, he rested as much as possible for the couple days he had leading up to this weekend’s event.

The championship implications of missing the race certainly helped him to maintain a low-key week, and even had his wife field and filter all his text messages while he was recovering.

“I really was very motivated to be here this weekend,” continued Newgarden.  “I knew if we weren’t in this race, it was going to be very difficult to stay in this championship fight.  That was kind of the end for me.  I know that we have to be in the race.

“Whatever I have to do to be fit and prepared is number one on my plate.  We’re here.  Had a tremendous amount of support.  I can’t thank IndyCar and their medical staff enough for all their help after the event.

“For me, I really just went into fight mode. I don’t know what I have, and I don’t know how severe of a concussion I do have.  I don’t even know if I have one.  I just went in and rested for 48 hours as intensively as I could.

“Nothing really bugged me.  I just did things because I heard they were the right things to do.  Light didn’t bug me.  Screens didn’t bug me.  But I avoided all that for 48 hours and tried to rest as much as possible.  By time Tuesday came around, I felt pretty solid and was just trying to track as best I could up to Thursday.

Newgarden qualified fifth in Friday’s return to track action, and will look to earn as many points as possible on Saturday in order to maintain his proximity to the top of the points table in pursuit of his third title.