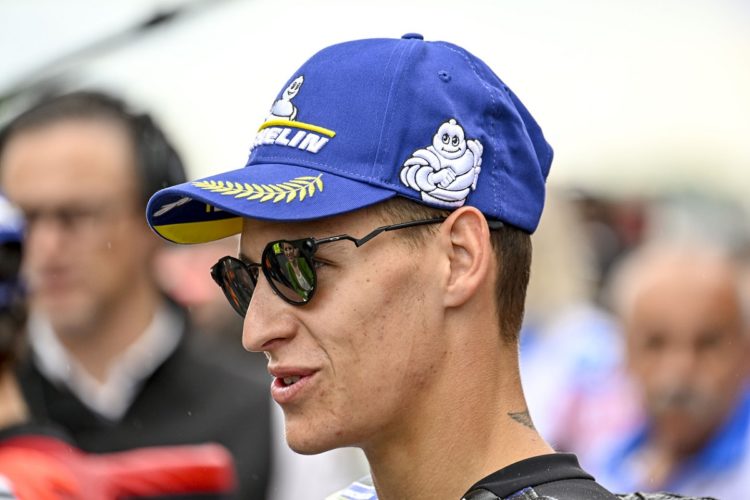 Fabio Quartararo says he is “working” to test a Formula 1 race car at the “end of the year”, the Yamaha man giving attended this weekend’s French Grand Prix.

The reigning MotoGP world champion signified his interest in testing an F1 prototype while attending the French GP at Paul Ricard this weekend, Quartararo spending time with the factory Mercedes squad and going on to state to streaming service DAZN that he was “working” to secure a test of an F1 car, admitting he is “hoping to get into a car one day.”

The likely destination for a potential test would be with the Mercedes organisation he spent the day with due to Yamaha title sponsor Monster Energy also involved with the German marque’s F1 outfit, while Mercedes electronics trackside engineer Jonathan Wilcox tweeted that he reckoned Quartararo “wanted to hang out with us lot in the garage for a lot longer.”

Speaking to DAZN on the French GP starting grid, Quartararo said he will “cross my fingers” that an F1 test will be on the horizon before too long.

“We are working to be able to get on a Formula 1 at the end of the year, so we cross our fingers,” explained Quartararo.

“Formula 1 is very different from MotoGP, but I like it a lot.

RNF Racing Yamaha Andrea Dovizioso meanwhile raced in the DTM at Misano in the same year with Audi, owners of the Ducati operation he competed for back then – the three-time MotoGP vice-champion taking a best result of 12th in the opening race of the weekend.

Quartararo is currently well en-route to scoring a second-straight MotoGP riders title, the 11-time race winner having taken the chequered flag on three occasions so far this year as he leads the points table by 21 markers over Aprilia’s Aleix Espargaro with nine races remaining.