O’Ward: We have ‘thrown away an easy hundred points’ this season 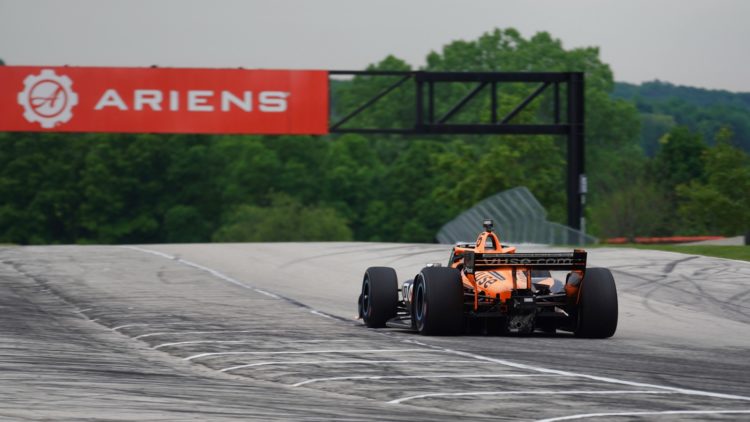 Pato O’Ward may have claimed one win and two podiums in the dual races from Iowa Speedway over the weekend, but he still feels that he should be higher in the championship fight.

There have been multiple races where the young Mexican driver has not been able to get results that matched his potential, including two consecutive engine failures at Road America and Mid-Ohio.

Other miscues throughout the season have meant that, despite logging two wins, he sits fifth in the points standings with five races remaining in the 2022 season.

Asked what he feels is the biggest hindrance to him moving higher in the standings, O’Ward described the easy gains that have been thrown away throughout the season.

“I think the biggest thing is because everybody that’s fighting for the championship is having good weekends,” said O’Ward. “No one is having bad weekends.

“For us, we’ve thrown away and we’ve given away an easy hundred points just either whether it was a strategy or if it was … I won’t mention the other ones.  We’ve just thrown away a lot of points that would have put us in a way better position of where we are right now.

“I have no other choice but to try and claw back.  We can just be more risky than others.  I really don’t care.  [Championship positions] four, five and six for me doesn’t really change anything.  I don’t care for sixth or fourth.  We need to go for [positions] one and two because we’ve already got a four and a three.

“The only way to do that is to win because you’re not going to get those points by being consistently in the top five.  I think if you’re in the lead, it would be a different story, but we’re not.

“I think we go to every oval believing that we can beat anybody and we’re going to have as good of a package as anybody else.  Yeah, going to other tracks is a little bit of a different story in terms of I think we’ve done a good job strategy-wise in ovals, whether it’s a superspeedway or short oval.

“We don’t seem to have that in road courses. So I think there’s some work to do there.”

Even though he sits fifth in the points, O’Ward is only 36 points behind Marcus Ericsson at the top of the standings, meaning he could theoretically gain the championship lead at the next race.

The close nature of the standings also means that it is easy to lose positions if he has any further disappointing weekends, which could put him out of the running.