Sainz: Ferrari made late pit stop ‘with the best of intentions’ 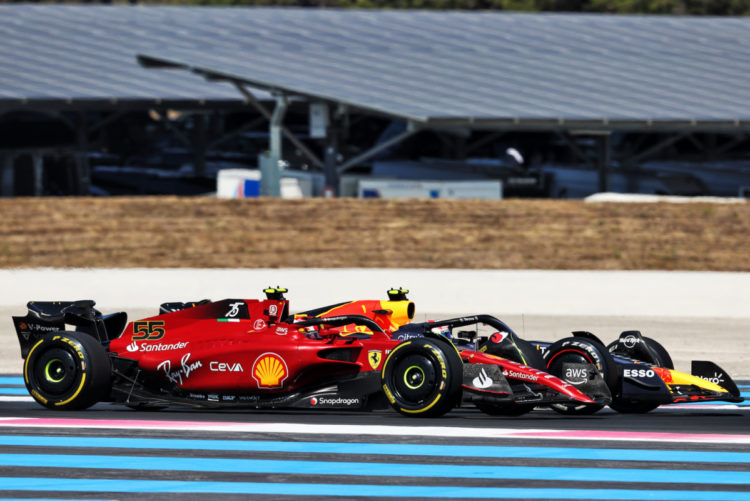 Carlos Sainz says Ferrari made the decision to pit him near the end of the French Grand Prix “with the best of intentions”.

Sainz made his first pit stop early in the race under a Safety Car intervention after team-mate Charles Leclerc crashed out of the race, switching his Hard tyres for a fresh set of Mediums.

The Spaniard had overtaken Sergio Perez late on in the event for third position, before Ferrari opted to bring him into the pits for new tyres with just over 10 laps remaining in the grand prix.

As it dropped Sainz down the order, the decision was criticised by many in the aftermath, amid a season in which Ferrari’s questionable strategies haven’t gone unnoticed.

Sainz crossed the line in fifth place, and says he trusts that the team made the right call as it was concerned over tyre wear.

“I’m sure when they show me the numbers from the data and the tyres, that they strongly believe that I would not have made it to the end,” Sainz said.

“We have to trust the numbers because it is what we base our strategy on.

“I’m sure they did it with the best of intentions. Obviously when you are in P3, in the podium position after starting last, the last thing you want to do is box and get out of the way and lose seconds in the pitstop.

“Maybe that is why I was more willing to take some extra risk there, but, in the end, the team played it safe with the tyres, which I totally understand and we will have to analyse together.”

Sainz started the race from the back of the grid after taking on a fresh Power Unit this weekend, but displayed strong pace throughout the entire event.

Without the grid drop, the 27-year-old believes that he would’ve been able to compete for the race win at Le Castellet.

“I am focusing on the positives,” he said. “The penalty is something I had to take, so I cannot control that, whatever is out of my control I try to put it behind [me].

“But the thing is I could’ve finished P2 in Austria, I think we would’ve been in the fight for the win this weekend.

“I had great pace, I could have been fighting for pole and the win so I am going to take the positives of a good moment that I’m going through and I am going to Hungary to try to win.”