O’Ward takes victory in Iowa as Newgarden crashes out 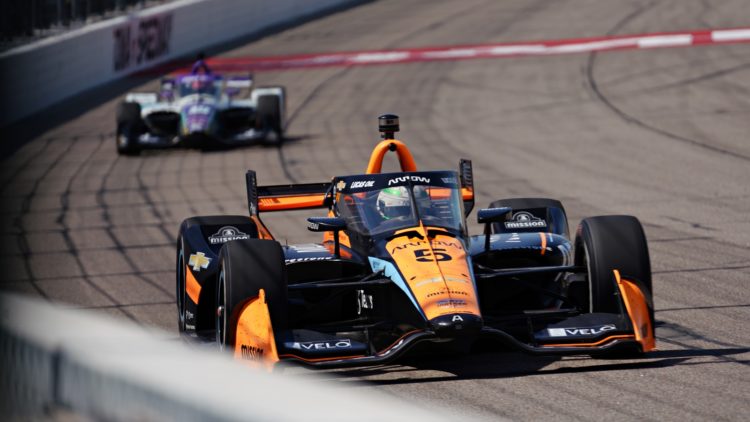 O'Ward was riding in the top positions all weekend, and was gifted a win when Newgarden crashed. Photo: Kevin Dejewski

The second race in as many days took place Sunday afternoon at Iowa Speedway, and it was Pato O’Ward who claimed victory on the short oval.

It’s the young Mexican driver’s second win of the season, and follows on from a second place finish on Saturday.

For a good portion of the race, it seemed that Josef Newgarden would be able to walk away with a second victory of the weekend.  He was able to methodically take the lead from the polesitter Will Power after 80 laps.

Once again, the two-time champion was out front and was not going to be caught, but luck was not on his side.  A sudden loss of control in turn 4 seemed to point to a suspension failure, but the root cause was unknown without further investigation.

Power was able to take home second place, completing a second podium for the veteran and moving him ever closer to the points leader.

The final step on the podium was occupied by Scott McLaughlin, who ran a clean race to keep himself in the fight for the entire race.

Scott Dixon took home fourth, and was followed by Jimmie Johnson who continued his amazing form on the short oval.  Johnson wrestled his car from low to high and everywhere in between to overtake his team-mate Marcus Ericsson with less than 10 laps remaining.

The NASCAR veteran’s oval skills were on full display for the entire weekend, and showed that he still hasn’t lost his speed despite having a rough couple years since switching to IndyCar.

The cooler temperatures and breezy conditions worked well for the Firestone tires, and drivers were generally able to drive nearly any line on the race track.  The near sellout crowd was given quite a show, not even considering the multiple headline concerts that bookended the race.

One of the best fights on the track was between team-mates Takuma Sato and David Malukas, as the two jockeyed for position for much of the later portion of the race.  Both took home a top 10 finish, completing a solid day for the Dale Coyne Racing team.

Rookie Kyle Kirkwood was another driver who crashed out of the race, something he has made a habit of doing this year.  It is the sixth time he has wrecked his AJ Foyt machine this season, which is certainly putting further strain on an already financially-limited team.

Christian Lundgaard and Simon Pagenaud each had mechanical issues which prevented them from earning anything better than spots near the rear of the field.

Drivers will barely have any time to recover from the long weekend of racing, as another event is scheduled on the Indianapolis road course July 30.