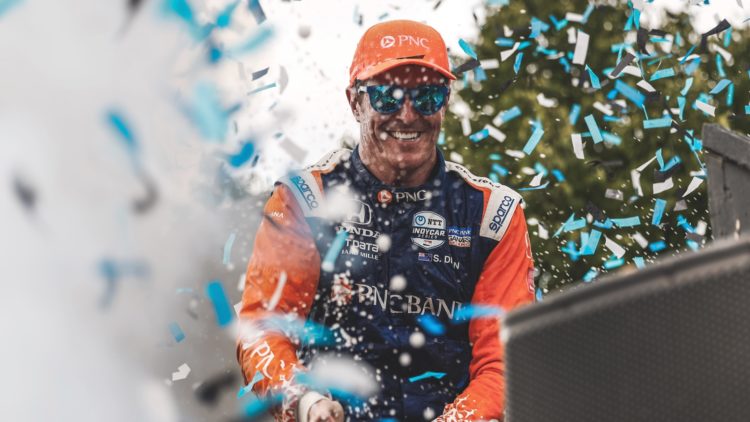 When Scott Dixon crossed the finish line in this weekend’s Honda Indy Toronto, he matched the win record for one of the most iconic drivers in open wheel racing.

The legend Mario Andretti earned 52 IndyCar wins in his career, and now Dixon has equaled that total to take a joint second on the all-time wins list.

Andretti took to social media directly after the end of the race to congratulate the six-time champion on his latest achievement.

“Utmost respect for my friend Scott Dixon and truly happy to congratulate him on 52 wins.  Also congratulate his team because nobody does it alone.  I hope this is just a step on your continuing journey.  Well done.”

Dixon was made aware of the praise as soon as he climbed out of the car, and the information immediately brought a smile to his face.

He then described how much the words meant to him, and how he sees himself compared to the older legends of the sport.

“I love Mario [Andretti] for so many reasons: what he’s done in the sport, achieved, what he gives back to the sport,” said Dixon. “I feel extremely lucky to have the likes of himself and AJ [Foyt] here most weekends.

“Even to sit and chat with these guys, the generations that they raced in or the time they raced is a lot different from now.  It means a lot to me, to even be mentioned in the same conversation as these greats.

“I never thought it was possible.  For me, it’s a huge credit to obviously the team that I work with now, but also the team that I started with, whether it was mum and dad to my brothers and sisters, all of my family, to the Scott Dixon Motorsport Group, which were the founders of getting a group together to put forward money and enable to get me to where I am today.

“As he stated, it’s a team effort.  But those words from Mario mean everything to me.”

Dixon now has claim to the second most IndyCar wins, but he has a long way to go before he can match AJ Foyt’s numbers.

The Iceman has stated that he intends to stay in the sport for many years to come, but earning 15 more wins to reach 67 would be an incredible achievement for a driver that is already nearly 42 years old.

Andretti is usually at each race driving honored guests in the two-seater IndyCar at the head of the field, but was not able to make the trip to Canada and thus was not able to deliver his message in person.