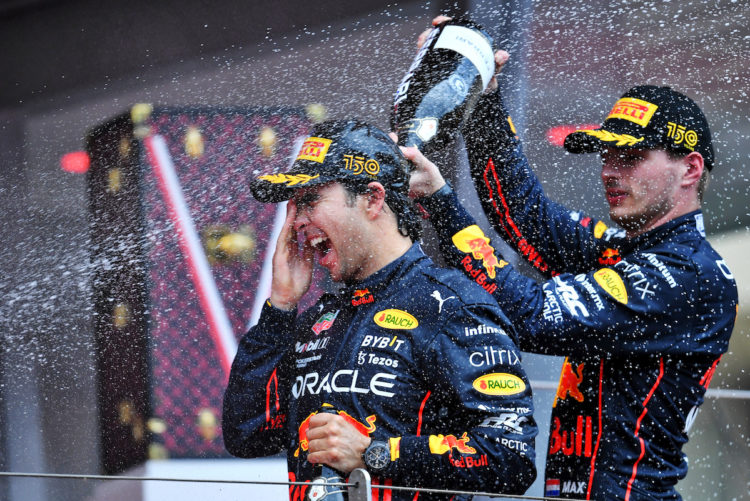 Sergio Perez has hailed his relationship with Red Bull team-mate Max Verstappen, insisting there is no jealousy between the pair.

Perez says that the harmonious relationship isn’t exactly what he has experienced with previous team-mates.

The Mexican joined Red Bull at the start of the 2021 campaign, after being ousted from Racing Point (now Aston Martin) for four-time World Champion Sebastian Vettel.

Verstappen has enjoyed the majority of Red Bull’s success over the last year and a half, however Perez has taken a handful of podiums, as well as two race victories for the Milton Keynes-based squad.

While Perez has at times bettered Verstappen, he insists that there is no friction between the pair when one beats the other.

“I think sometimes in the past I’ve had some jealousy from a team-mate,” Perez told LadBibleTV.

“And I think not many people can take it, but I think within us, when I win, when Max wins, there is always… we feel proud of each other and that’s something good within us.”

Verstappen has had a handful of team-mates throughout his stint in F1, but shared a publicly positive partnership with Daniel Ricciardo from 2016 to 2018.

However, the Dutchman says that he feels his current team-mate relationship is the best he’s experienced, aided by self-maturity and growth over the last handful of years.

“I started of course very young in Formula 1 and I had I think also a very good relationship with Daniel,” said Verstappen.

“But at the time I was still only 18, 19 and I think where I am now as a person is completely different.

“So I would say that what I have now with Checo is definitely the best, just because I matured a lot. And I think that also helps a lot with just how you approach each other.”