Alpine take victory over Toyota in 6 Hours of Monza 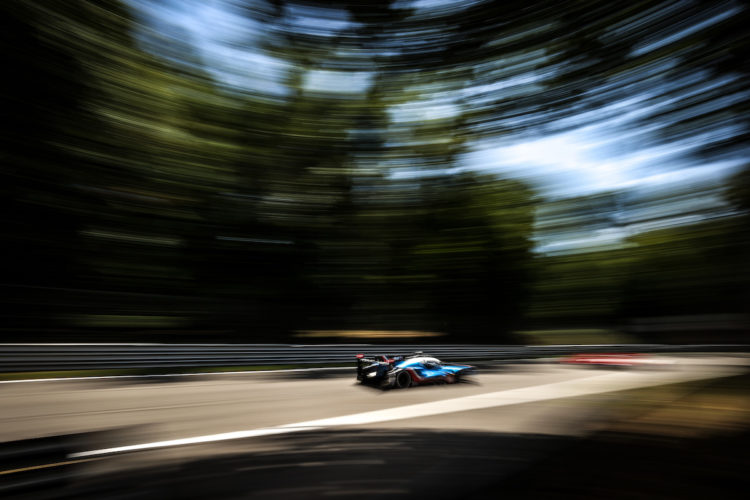 Andre Negrao, Mathieu Vaxiviere and Nicolas Lapierre won the 6 Hours of Monza in the #36 Alpine A480, the team’s second win of the season, 2.762 seconds ahead of the #8 Toyota of Ryo Hirakawa, Kazuki Nakajima and Sebastien Buemi.

The #708 Glickenhaus started on pole and led the vast majority of the opening half of the race, building a large gap to the Toyotas, Alpine and Peugeots. But Henrique Chaves huge crash, rolling the #33 TF Sport Aston Maryin Vantage AMR at the second chicane, eradicated that gap as the safety car was deployed. To make matters worse, the team also then received a drive through penalty for speeding under full course yellow, dropping them behind the Alpine and Toyotas.

They were only 30 seconds back, though, and with the pace they showed in the opening 3 hours the win was still on. That was until the car’s turbocharger failed, putting the car out of the race almost instantly.

This then made it a battle between the Toyotas and Alpine. The three cars battled hard for positions, with Vaxiviere pulling off a great move around the outside of Hirakawa at Parabolica to take second.

However, soon after, the Frenchman caught Kamui Kobayashi, leading the race in the #7 Toyota. The two duelled for position down the main straight, but Kobayashi made an uncharacteristic error, moving over on Vaxivierre while he was still alongside on the inside. This caused the two to make contact, ripping the entire tyre carcass off the Toyota and almost causing the Japanese driver to lose control of his car.

After straight-lining the first chicane Kobayashi returned to the pits, where the team quickly repaired the damage. He then got a 90-second penalty for his role in the collision, putting the car a lap down and out of contention for the win, leaving Vaxivierre to maintain the slim gap he had to Hirakawa until the end of the race.

With the podium sorted, fourth place went to the race-debutting #94 Peugeot 9X8, driven by Gustavo Menezes, Loic Duval and James Rossiter. Both Peugeots were off the pace all race, not able to challenge the others in the Hypercar class. The #94 also spent considerable time in the garage, finishing 33rd overall, 25 laps down.

The #708 Glickenhaus of Romain Dumas, Pipo Derani and Olivier Pla was fifth in class, but 36th overall and out of the race, spending the last three hours in the pits. The sister #93 Peugeot was last overall after more issues hit the car in the first stint, meaning it retired early on and did not return to the track after it stopped on the circuit with Mikkel Jensen at the wheel.

In LMP2, the #41 Realteam by WRT Oreca 07-Gibson of Ferdinand Habsburg, Rui Andrade and Norman Nato won, fending off Will Stevens in the #38 Jota Oreca 07-Gibson in the final stint.

Early race leader #22 United Autosports Oreca 07-Gibson looked good for the win, outpacing much of the competition, but a throttle sensor issue delayed the car in the garage, meaning it finished 23rd overall.

Third in class was the #10 Vector Sport Oreca 07-Gibson of Nico Muller, Sebastien Bourdais and Ryan Cullen, finally overtaking Alex Brundle in the #34 Inter Europol Competition Oreca 07-Gibson after a long, drawn out battle. Brundle and his teammates Jakub Smiechowski and Esteban Gutierrez finished fourth, ahead of the #23 United Autosports Oreca 07-Gibson of Alex Lynn, Oliver Jarvis and Josh Pierson.

Corvette took a somewhat surprise victory in GTE-Pro, after the gtwo Ferraris led for much of the race. Nick Tandy, behind the wheel of the lone #64 Corvette C8.R, won alongside his teammate Antonio Garcia, after a race-long battle with both the #52 Ferrari 488 GTE EVO, driven by Miguel Molina and Antonio Fuoco, and the sister #51 Ferrari 488 GTE EVO of Alessandro Pier Guidi and James Calado, who started the race on pole.

Pier Guidi had a titanic battle with Kevin Estre in the #92 Porsche 911 RSR-19, with bopth drivers making contact multiple times. Estre was eventually pinged for his aggressive driving, receiving a drive through penalty as a consequence, but he still finished the car fourth along with his teammate Michael Christiansen, who started the car six hours previously. The other Porsche, #91, driven by Gianmaria Bruni and Fred Makowiecki, finished fifth.

In GTE-Am, the #77 Dempsey-Proton Porsche 911 RSR-19 squad denied the Iron Dames a first female race win in an FIA-sanctioned series. Harry Tincknell, Christian Reid and Sebastian Priaulx came up through the field to take the win, leaving the pits at their final splash and go fuel stop with six minutes to go just four seconds ahead of Michelle Gatting in the #85 Iron dames Ferrari 488 GTE EVO.

Gatting and her teammates, Sarah Bovy — who qualified the car on pole, the first all-female car to qualify omn pole in WEC — and Rahal Frey were second after the race-long battle with both the winning Dempsey-Proton Porsche and the #46 Team Project 1 Porsche, which finished third with drivers Matteo Cairoli, Mikkel Pedersen and Nicolas Leutwiler.