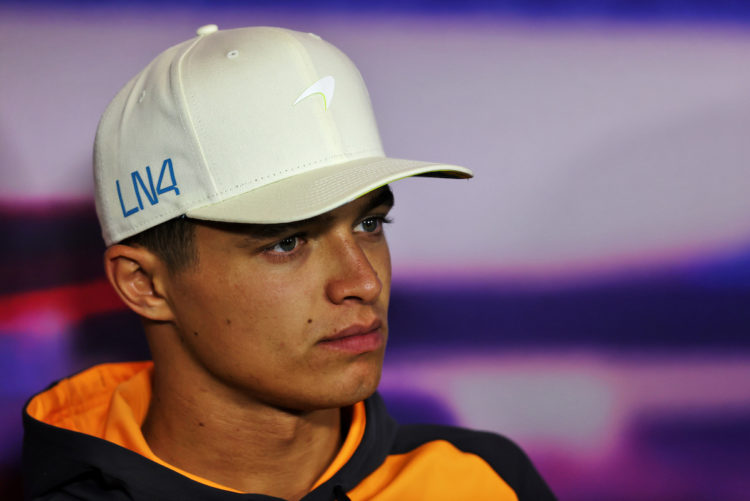 Lando Norris has hit out at those who use social media to spread hate messages, insisting that they are wasting their lives in doing so.

On the build-up to the British Grand Prix last week, Norris gave an interview to The Sun, in which he highlighted the abuse that he and his girlfriend have received online.

These included death threats, while some have established dedicated hate pages directed at his girlfriend.

While acknowledging his own negative experiences, Norris understands that he is not the only driver that receives abhorrent messages online.

“So, it’s just something I love being kind of part of, and I’m very involved in – but of course, me and I’m sure, pretty much every other driver gets a lot of hate and abuse and things like that.

“And I guess from a mental state of it, it’s never an easy thing to continue to go through. There’s just no need for it, whatsoever.

“The point of it literally just coming from a person who’s sitting behind their phone, or a computer, whatever it is, I just find it odd that someone’s wasting their life doing something like this, you know?

“They’re not trying to go out and have fun and spend time with their friends and create memories.

“They’re trying to bring people down, which I think is a waste of our lives here. [It’s] a very limited time that we get, so it’s a shame.”

While Norris admits that he finds it difficult to speak about the subject, he says that he will continue to do so if it helps other people’s mental health.

“Of course, it’s never easy for me to speak about it,” he said.

“But it’s something that, especially with the comments you get back, and the change that people say I’ve had in their lives and the impact that I’ve had on their lives.

“No matter if I’m confident or not to talk about it, the impacts you can have overrides any of that.

“So, if there’s any things that I can ever help on – I’m sure every driver wants to help on – then when you have that change, and you can potentially save someone’s life. That means more than anything.”