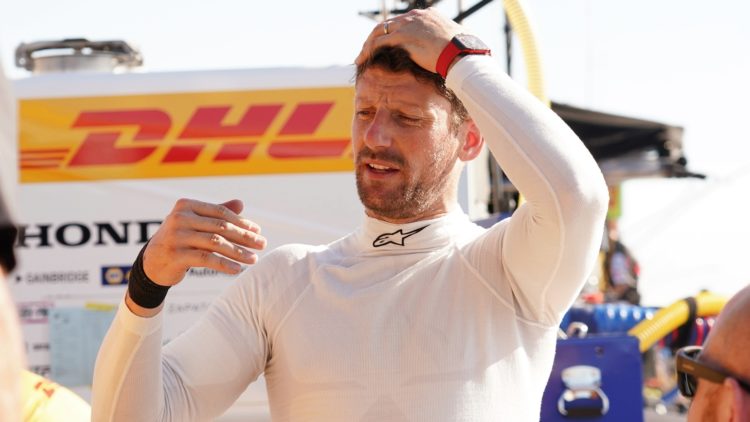 Grosjean was very frustrated after colliding with his team-mates on track. Photo: Kevin Dejewski

Sunday’s IndyCar race from Mid-Ohio left a few drivers frustrated, but none were more upset with each other than the members of Andretti Autosport.

Alexander Rossi and Romain Grosjean had the biggest run-in of the day, as the two drivers collided multiple times while battling for position near the end of the race.

Rossi pushed his team-mate wide at the exit of turn 2 on lap 58, then the two collided again in the same corner on the very next lap.  Tempers flared on both drivers’ radio, as they each felt the other was responsible for the collisions.

Replays showed that Rossi kept his wheel turned and did not seem to intentionally run wide into Grosjean, but the damage was already done and both drivers were quite displeased with the outcome.

Speaking with the IndyStar near the team’s hauler after the race, a frustrated Grosjean did not hold back in describing what he thought of Rossi’s driving standards.

“He’s an absolute idiot,” said Grosjean.  “Sorry.  I don’t know why he does that.  He’s on blacks [tires], I’m on reds.  I’m on the outside and am carrying more speed through the corner.

“He did it [hit me] once on the restart, I thought ‘Ok, maybe he slipped because he’s on cold tires, I’ll do it again the next lap.’  And he did it on purpose.  My hand is hurting, we lost the bloody race.

“One thing I want to say, I must apologize to Colton [Herta].  I got Colton because I was catching the pack with really warm with a lot more grip than everyone else.  I just braked and didn’t realize Colton would break so early.  I tried to avoid contact.

“That wasn’t good for my side, but I think that’s the biggest part today, that Rossi’s an absolute idiot out there.”

Rossi and Grosjean were able to continue after their collisions, but the Frenchman had to wait to be pulled out of the gravel trap and was one lap down for the rest of the race.

The intra-team carnage did not stop there, however, as both drivers were heated in the cockpit and ended up colliding with other members of the Andretti squad in the final laps.

Rossi ran into the back of his other team-mate Devlin DeFrancesco while attempting to make a pass, pushing him off into the grass. Elsewhere, Grosjean misjudged a braking point and pushed another Andretti driver Colton Herta off into the grass as well.

Between all the off road excursions, extra pit stops to fix damage, and penalties, all four Andretti drivers finished in the lower half of the results.  And all had something to be upset about.

Team owner Michael Andretti did not speak on record after the race, but is understood to have called an emergency team meeting to try to put a stop to the on track fighting.

Drivers were also pulled away from media interviews by PR staff in order to try to limit any comments that could escalate the situation, although the tension was clear from the little that was said.

Rossi has been confirmed to be moving out of the team next season, as he will be piloting a third Arrow McLaren SP entry.  There are still eight races left this year, however, where he will be forced to race alongside his current team-mates.

The team has two weeks to cool its drivers down before they head to the streets of Toronto, where continued battles could lead to cars in the wall instead of a trip through the grass.