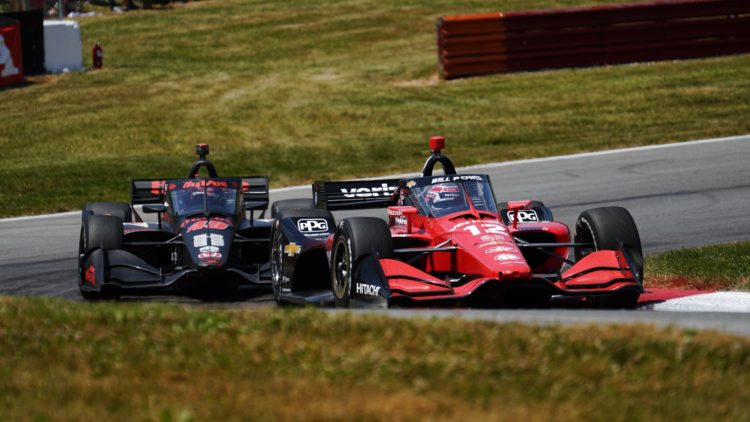 Power completes one of his 18 passes on Jack Harvey. Photo: Kevin Dejewski

Will Power’s podium finish in Mid-Ohio was not just the comeback drive of the day, it was perhaps the veteran’s best drive of the season.

After starting near the rear, and then making a mistake on the first lap that put him in the grass and left him at the very back of the 27-car field, it seemed that Power was going to have a disappointing day.

He immediately began working his way through the field, completing passes left and right, and was in the top 10 by the halfway mark. A well-executed pit stop gained him even more positions, and he was able to maintain his good track position through to the end of the race.

In all, Power was personally responsible for 18 out of the total 183 on-track overtakes of the day.  And incredible feat on a circuit that punishes mistakes harshly and typically makes it difficult to pass.

“We had the fastest car and it really hurts to give up a chance at a pole or potentially a win, but to get back to third, you’re not looking back on those days saying that’s why we lost a championship,” said Power after the race.

“You certainly find it fun after the race, but you’re so focused during the race, you just — that’s the enjoyment of a skill is executing it the best you possibly can.  Yes, I enjoy it a lot.

“I enjoy qualifying, putting it all together a whole race weekend.  But yeah, when you have a day like that, makes you want to keep going for a long time.

“I think the lesson is that even if you don’t pass any cars today, you’re still making positions.  If you don’t make any mistakes, just to start with, and then you have a fast car on top of that and you make smart moves, you’re going to make positions.”

Power didn’t just sit back and wait for positions to come to him, however.  He actively worked his way through the field and earned his fourth podium of the season.

His ability to fight his way to the front meant that he was able to maintain the second position in the points standings, and is well in contention to fight for his second IndyCar championship.