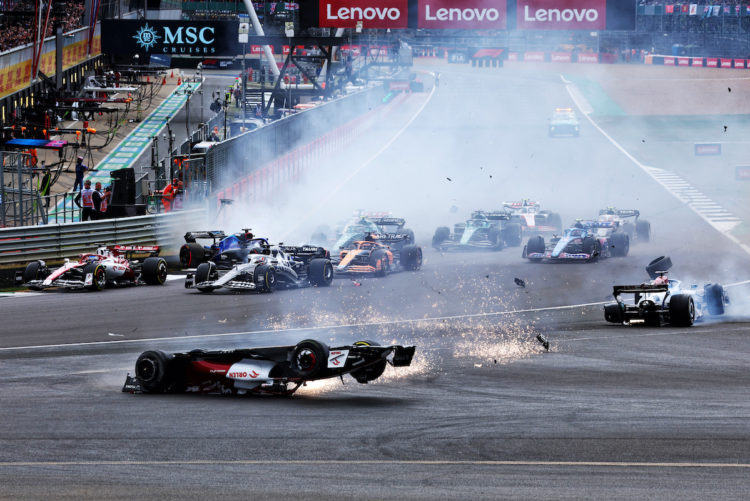 Zhou Guanyu says that Halo cockpit protection device saved his life during the opening lap crash at the British Grand Prix on Sunday.

Zhou’s car was flipped upside down after it made contact with George Russell’s Mercedes on the run to Turn 1, before it launched over the tyre barrier and into the catch fencing.

The Alfa Romeo challenger then became lodged between the barrier and the fence, before the Chinese driver was extracted and brought to the medical centre for evaluation.

After a thorough check, doctors released Zhou from the facility, determining that he had sustained no injuries in the sizeable accident.

Zhou has credited the Halo with saving his life: “It was a big crash and I’m glad I’m ok,” he said.

“The marshals and the medical team at the track were fantastic with their quick response, and I also owe my thanks to the FIA and Formula 1 for all the work they have done, and they keep doing, to improve the safety of our cars.

“The Halo saved me today, and it goes to show that every step we take in improving our cars has real, valuable results.

“I’m keener than ever to get back on track and do what I love: I’m fit and I’m looking forward to Austria next week.”

Alexander Albon was also brought to the medical centre at the track and was later transported to Coventry Hospital for precautionary checks.

“The main thing today is that Zhou is fine,” he said. “It was a big shunt, and I’m glad that nothing serious happened and that he has already been cleared by the FIA.

“Today, we got additional proof on how the Halo is one of the greatest innovations in F1, and how safety has improved in recent years.”