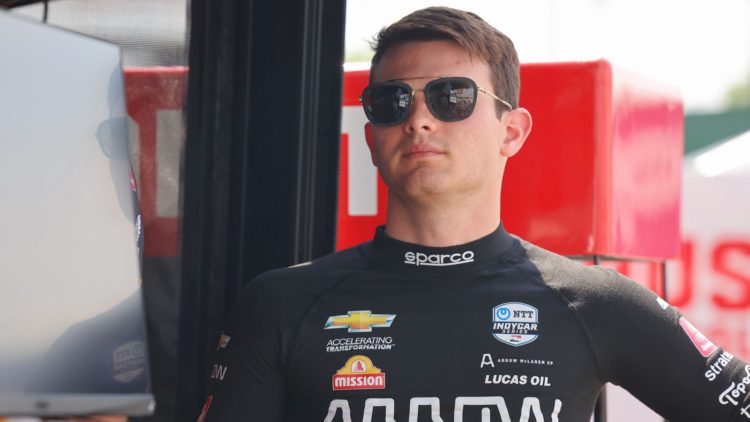 O'Ward did not feel that he was responsible for how close Malukas was in qualifying. Photo: IndyCar

In Saturday’s IndyCar qualifying from Mid-Ohio, multiple drivers were blocked on track on account of so many cars fighting for a clear space on the short 2.26-mile course.

One of the most visible instances of impeding was when David Malukas was attempting to set his fast lap at the end of the second round of qualifying, and came up on the back of Pato O’Ward.

O’Ward did not move aside to let the rookie past because he was in the middle of a predetermined warm-up procedure in preparation for his own fast lap attempt.

Stewards investigated the issue, but found that the infraction was not bad enough to warrant a penalty, despite Malukas obviously having less room in front of him than he would have liked.

O’Ward went on earn pole, and described after the session that it was not his fault there was no gap behind.

“Yeah, it’s not my problem,” said O’Ward frankly.  “I think he’s got to learn how to distance himself and learn that.

“I think he put himself in that position because the red tires were coming in in lap 3 and he was on my gearbox in lap 1.  It’s like, ‘What do you think I’m going to let you by or something?’

“I’m in my program, too.  Yeah, I don’t think I was doing anything wrong there . I was gapping to Simon [Pagenaud] and he decided not to do so and he had a pretty big gap and usually people respect when someone gaps in front of you they keep gapping so you’re not really under threat.

Other drivers, such as Will Power, were penalized for blocking other drivers, but race control deemed that not all incidents warranted a penalty.

Malukas was not happy with the decision to not penalize O’Ward, and his Dale Coyne Racing crew requested clarification from race control over the incident.

There is no opportunity to alter the results after qualifying, however, and Malukas will have to start from the fourth row in Sunday’s 80-lap race.