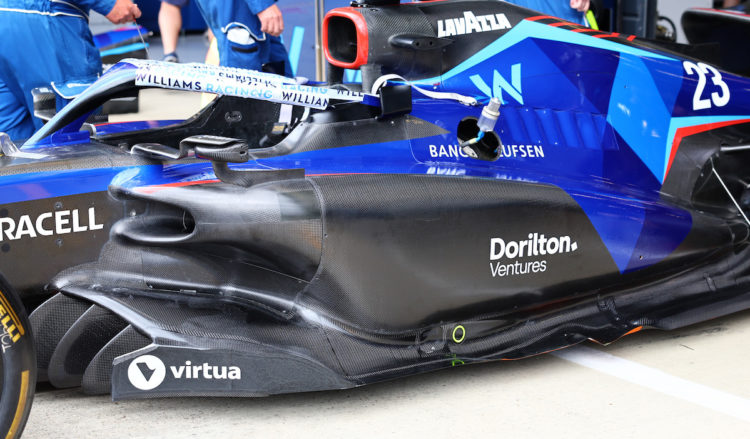 Williams have introduced their first and likely only major update package of the 2022 Formula 1 season, with Alexander Albon’s FW44 sporting a raft of upgrades for this weekend’s British Grand Prix.

The new update, which will only feature on Albon’s car this weekend, allowing the Grove-outfit to run direct back-to-back comparisons with the old spec, features an all-new floor, side pod design and rear wing, following the ‘Red Bull’ concept.

“I think what you’ll see is it’ll look more towards what the rest of the grid looks like,” explained Albon. “I think as you’ve seen, everyone’s been going towards a certain concept. I think, as we know, everyone started a bit different.

“It’s either the kind of the Ferrari concept, or the Red Bull concept, that seems to be adopted.

Teams are beginning to converge on similar design concepts, with Aston Martin in Spain unveiling a car that looked suspiciously similar to the Red Bull RB18, prompting the AMR22 to be dubbed the ‘Green Red Bull’, with Red Bull playing along as they all sat with cans of green Red Bull cactus fruit flavour drinks on the pit wall that weekend.

Williams are currently the slowest car on the grid with just three points – all scored by Albon – putting them 12 adrift of Haas and 13 adrift of Aston Martin.

Albon is hopeful the update can propel them into the midfield this weekend: “It’s hard to say what we’ll do, I think a second, if we took that we would be very, very happy. But yeah, truthfully, speaking until we drive the car, we won’t really know. But we obviously are hoping for a good improvement.”