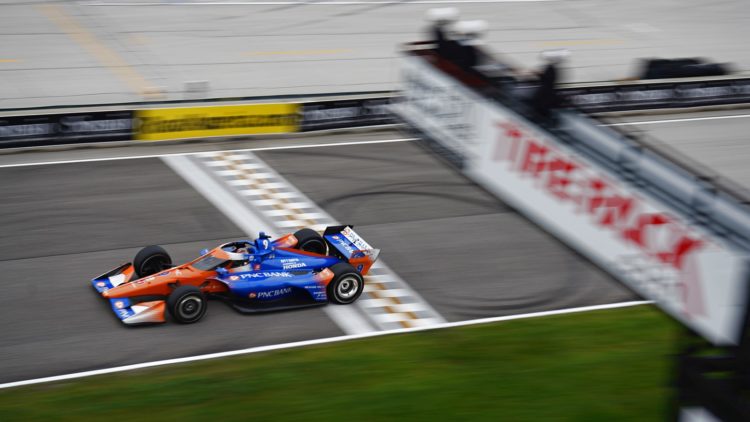 Dixon has many top 10 finishes, but only one podium this season. Photo: Kevin Dejewski

Scott Dixon has had a bit of a hit-or-miss year in IndyCar, failing to consistently find the pace that has defined his 20-year career in the series.

Even though Dixon sits sixth in the points standings, there have been a few mistakes throughout the season that are uncharacteristic for the veteran known as ‘The Iceman.’

In the GMR Grand Prix, his Chip Ganassi Racing team left him out one lap too long before a pit stop, and he ran out of fuel while on pit lane.  His crew had to push the #9 into the pit box in order to receive service.

Then at the Indianapolis 500, Dixon was given a penalty for speeding on pit road, which knocked him out of contention for the win late in the race.

Describing these mistakes, the six-time champion talked about how sometimes both he and his crew have over-adjusted to the situation, and led to some less-than-ideal results.

“There’s been some easy misses,” said Dixon.  “I think we’ve had speed.  I think as a group and as a team, we just haven’t been getting the job done.

“There’s some areas where we could definitely do a better job in getting more speed out of the car, but even Road America I think from our Q1 time would have got us through to Q3, but we overanalyzed the situation, made a very big shift in balance and that knocked us out of Q2.

“I think at some points we’re over-trying, and it’s easy in this scenario where it’s not as relaxed or just rolling as smoothly as it could be, that whether it’s me or the team or the adjustments that we make, we just may be going over the top. We’ve just got to find our groove.

“Right now it doesn’t take much to kind of fall out of a cycle or fall out of where you need to be. So we’ve just got to keep doing what we typically do, not try to make a big deal of each situation, and hopefully get on a roll here soon.

“I was hoping that the Indy 500 was going to be that turn and kick that we needed, but yeah, it’s been an interesting year, lots of ups and downs and some missed opportunities.

“I think Marcus [Ericsson] has had a fantastic run, leading the points right now; Alex [Palou] has had a little bit of bad luck.  Just hoping for the whole team we can get ahead down here and fight for another championship for Chip.”

Dixon has only earned one podium so far this season, with the strong showing in Detroit not quite making up for other mistakes throughout the season.

Half of the 2022 season remains, and the experienced driver will look to begin his push for a seventh title this weekend at Mid-Ohio, where he is the all-time winningest driver.