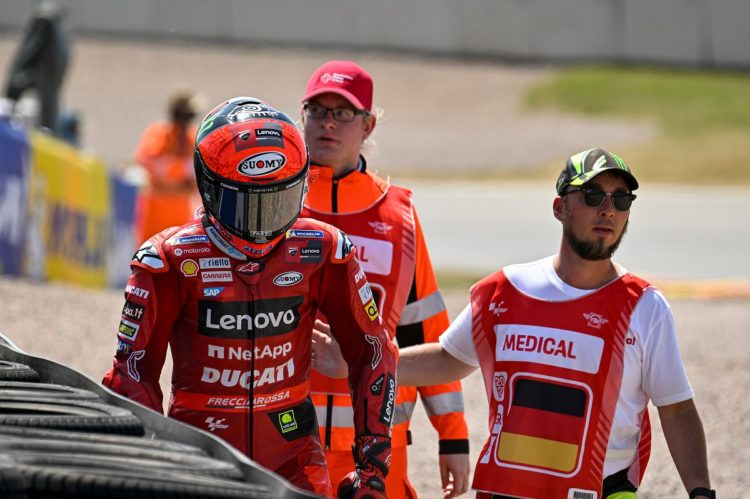 Francesco Bagnaia says he remains focussed on fighting for the 2022 MotoGP rider’s title despite facing a 91-point deficit to Fabio Quartararo following his fourth DNF of the year.

Having scored pole for the German Grand Prix at the Sachsenring, the factory Ducati racer lost out to series leader Quartararo on the run to Turn 1 and was forced to settle in behind the Yamaha pilot after failing to pull off a move for the leadership at the opening bend at the start of the second tour.

Keen to keep his front tyre temperature and pressure under control in the dirty air of Quartararo’s M1, Bagnaia looked to regroup and later attack the Frenchman later on – though his charge was ended early after he lost the rear of his Desmosedici on the exit of Turn 1 just four laps into the encounter.

Bagnaia affirmed he was “really angry” following the “strange” crash that has set him further back still in the championship race, adding that he has “never seen a MotoGP rider cash like this in the dry.”

“The plan was to attack at the start but if I was unable to fight with Fabio (Quartararo) in the first two laps because he had the medium I would try to not stay close to him to try and not overheat the front tyre.

“This didn’t go well because I crashed, looking at the data it’s tough to understand (how it happened) but my feeling is that it’s a strange crash because I’ve never seen a MotoGP rider crash like this in the dry like I was in the wet or on mud.

“In any case it’s probably my mistake because I’m the one who crashed, but if I had to look at the positives we know we were fast again but we will forward to the next one.”

While conceding that “in this moment I’m not so positive”, Bagnaia assured that he “will do my best” to try and dig himself out of his current 91 marker hole across the remaining ten encounters to try and secure a maiden premier class riders title.

“In this moment I’m not so positive, but I will try to recharge a bit over the next few days and try to be at the front in Assen,” continued Bagnaia.

“We need to do a lot (championship hopes) but mathematically the chance is there so we’ll try, it may not be possible but we still have 250 points so I will do my best.”