The annual Azerbaijan GP appointment is becoming more and more important from a technical point of view. Also this year on the Baku circuit we have seen many technical innovations, even more with this new generation of 2022 machines, which have great margins for development. 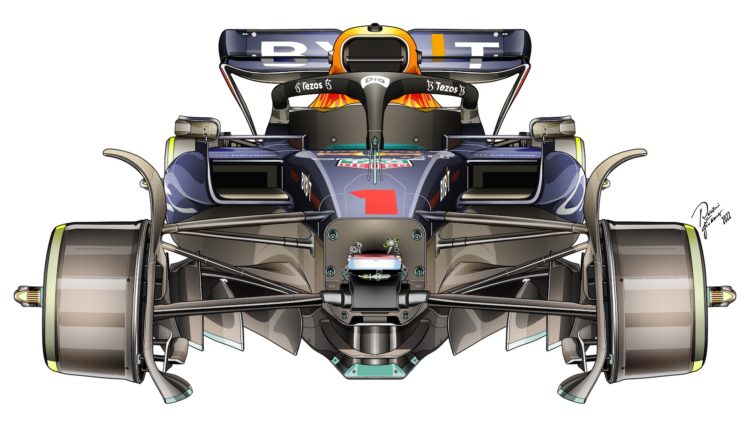 The annual Azerbaijan GP appointment is becoming of greater importance from a technical point of view. This year on the Baku circuit we have seen many technical innovations, even more so with this new generation of 2022 cars, which have great margins for development.

There have been many technical innovations on the various cars, almost on a par with those that are usually brought to the Spanish GP every year. We have not only seen updates on the wings – very different from those used in Spain and Monaco – but also some proper upgrades on almost all the cars.

The Ferrari/Red Bull duel is also disputed on the technical-aerodynamic front, and both teams made some technical refinements on both the F1-75 and the RB18.

Ferrari presented itself in Azerbaijan after the disappointments obtained in the previous two GPs, but from the point of view of performance the F1-75 proved to be still the most versatile and competitive car over one lap, but there remains concerns over its race trim and particularly its reliability after both drivers failed to finish the race.

The package of updates introduced in Spain brought about an overall improvement on the Italian car of about 1-2 tenths, above all recovering the speed on the straights and reducing the porpoising effects.

The focus of Ferrari’s interventions in Spain mainly focused on the floor, both in the front area where there are the venturi inlets, and in the diffuser area. We saw the real extent of this in Monaco, when Sainz’s car was lifted off the ground by the crane, allowing us to clearly see the underside of the F1-75 floor. From the image we have seen how Ferrari has modified the plank on the side edge, in order to create a ramp that would bring part of the flow inside the Venturi tunnels. 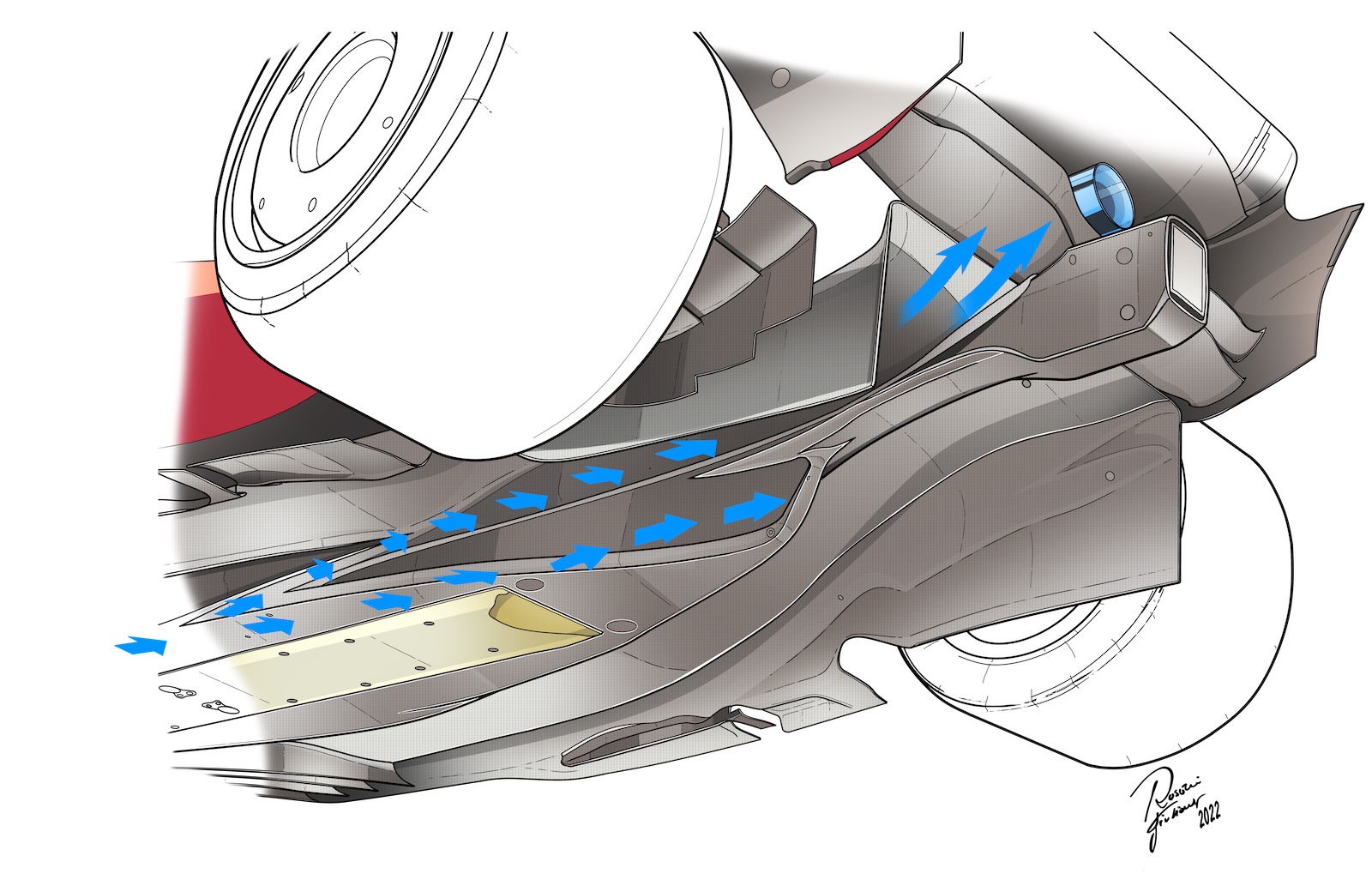 The new diffuser, with the keel in the central area, serves precisely to keep the airflow contained within the venturi ducts in the outlet area. Ferrari has also introduced new features to counter porpoising, by implementing a skid to keep the floor in the right position with respect to the track surface, and to prevent the strong suction effect from deforming the floor and allowing airflow to escape, releasing pressure and causing the car to rise.

Spain and Monaco, however, are two tracks that forecasts were in favour of Ferrari. Baku and Canada, on the other hand, appear to be more pro Red Bull, being fast tracks with long straights. Baku however is very different from Montreal, as the corners are mainly slow and sharp, where most of the grip depends on the mechanics and where traction is the most important element. In terms of traction, Ferrari proved to have excellent qualities deriving from mechanics, which it inherited from last year’s single-seater.

New mirror supports have also been fitted to the Ferrari, with an even more aerodynamic function. The vertical support near the cockpit acts as a vortex generator, and no longer has an arch shape like in the old specification. 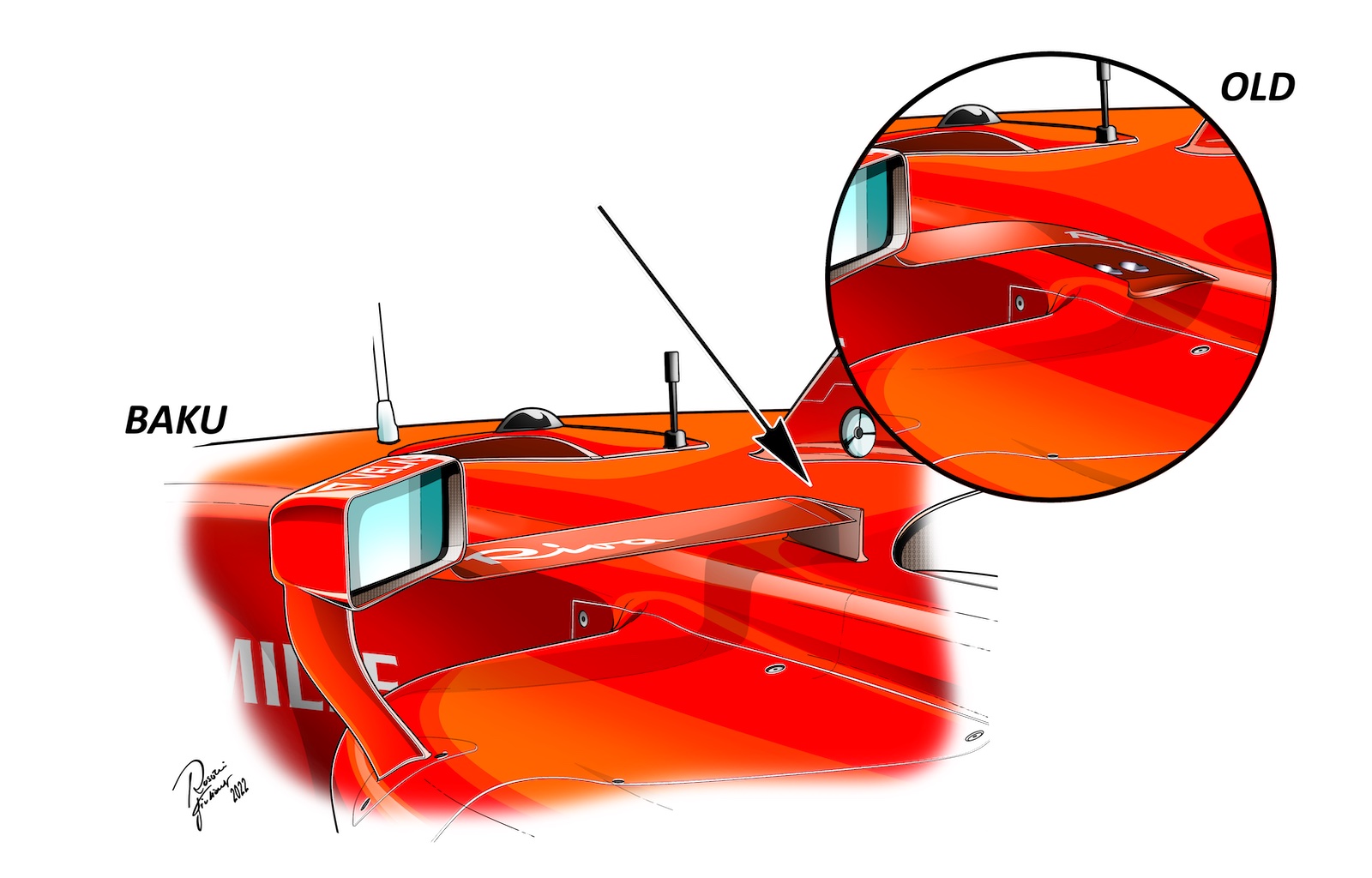 What can have the most impact in Red Bull’s favour are the straights in Baku and Montreal, where the RB18 could enhance its aerodynamic efficiency qualities. We have already seen in Jeddah and Miami how Verstappen and Perez’s car makes the difference in the fast sections.

The characteristics of the RB18 tend to go lighter than the F1-75, and the Adrian Newey-designed car does not seem to fear the stress of the tyres with less downforce. In Baku, Red Bull even removed one of the two beam wing profiles. 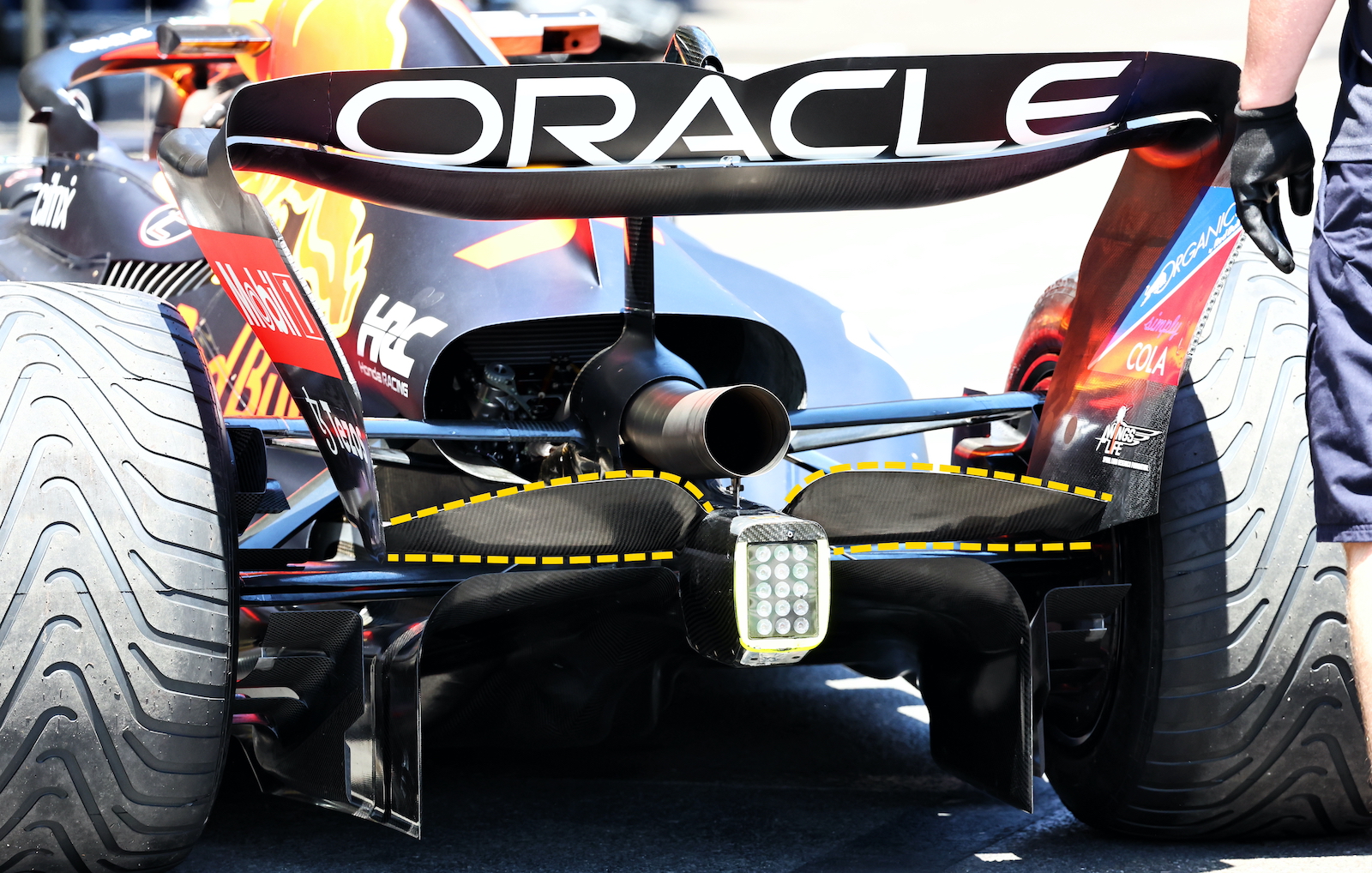 Red Bull opened an important gap in terms of top speed on the straights compared to Ferrari in FP1. Ferrari finally introduced the low-load rear wing in FP2 on both single-seaters, after there was talk of this wing in Miami that never materialised. On the F1-75 this wing was then tested better in the filming day in Monza, but there were no photos of sufficient quality that allowed us to see the new solution in detail. 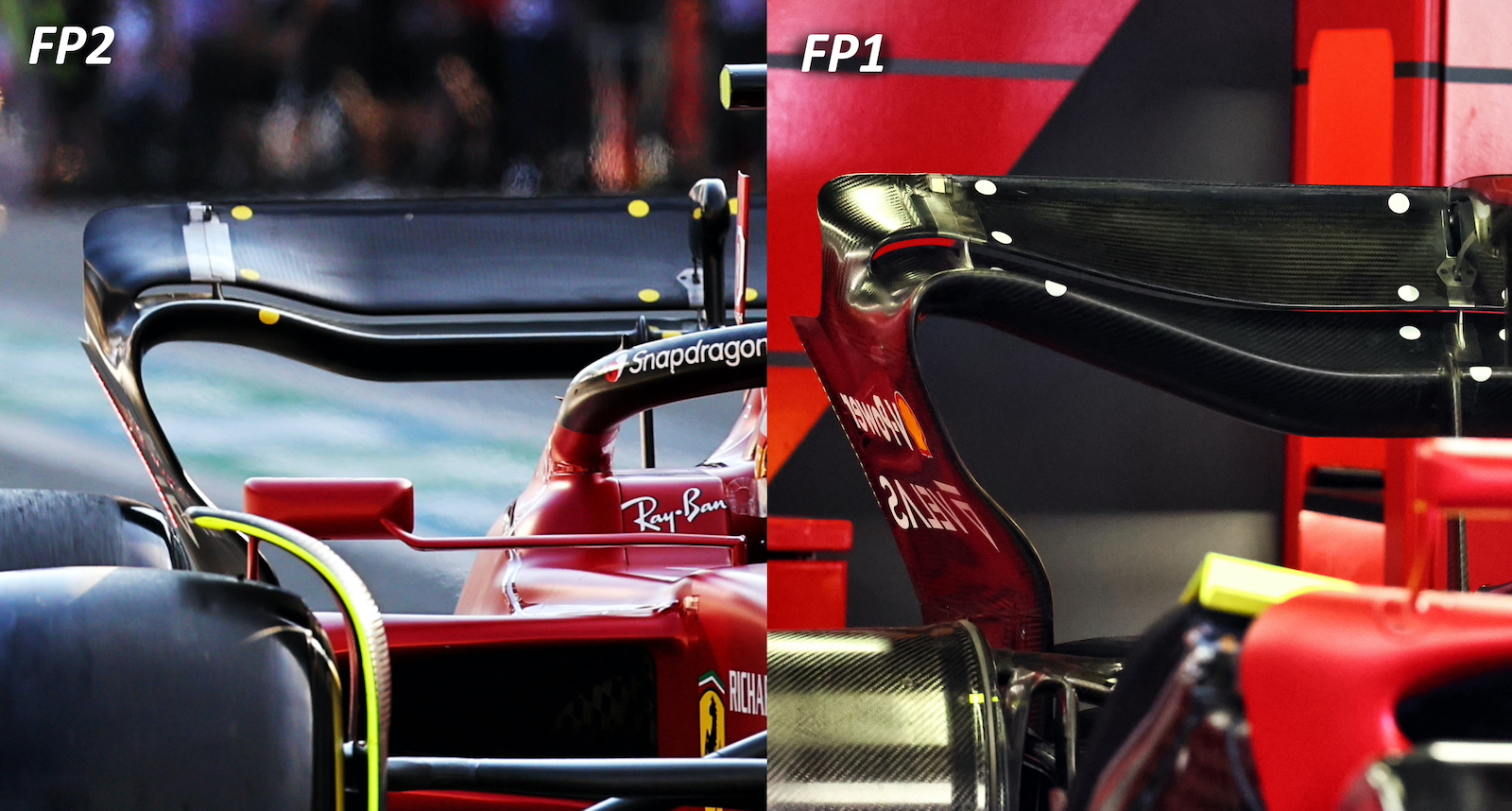 The new wing, with a main profile with a reduced string and a less noticeable “spoon”, has actually brought Ferrari to speed levels more in line with those of the RB18. Ferrari wanted to keep this solution aside in Miami, as it was feared that the abrasive asphalt could affect the tyres too negatively with less downforce.

In terms of porpoising, a less loaded wing makes the triggering of the hopping less evident, also in part thanks to the modifications to the floor introduced by Ferrari in Spain. Red Bull, on the other hand, for Baku has introduced small adjustments to the floor and to the rear part of the sides, revising the outer edge of the diffuser, and adding the anti-bending tie rod. The elongated keel along the centre channel of the diffuser was also seen on the RB18, not very different from the one Ferrari introduced in Spain.

The most important novelty seen on the RB18 in Baku is that of the venturi entrances, wider and higher and further back than the chassis. This certainly allows for a greater air flow inside the entrances, at the expense of a slight increase in drag. 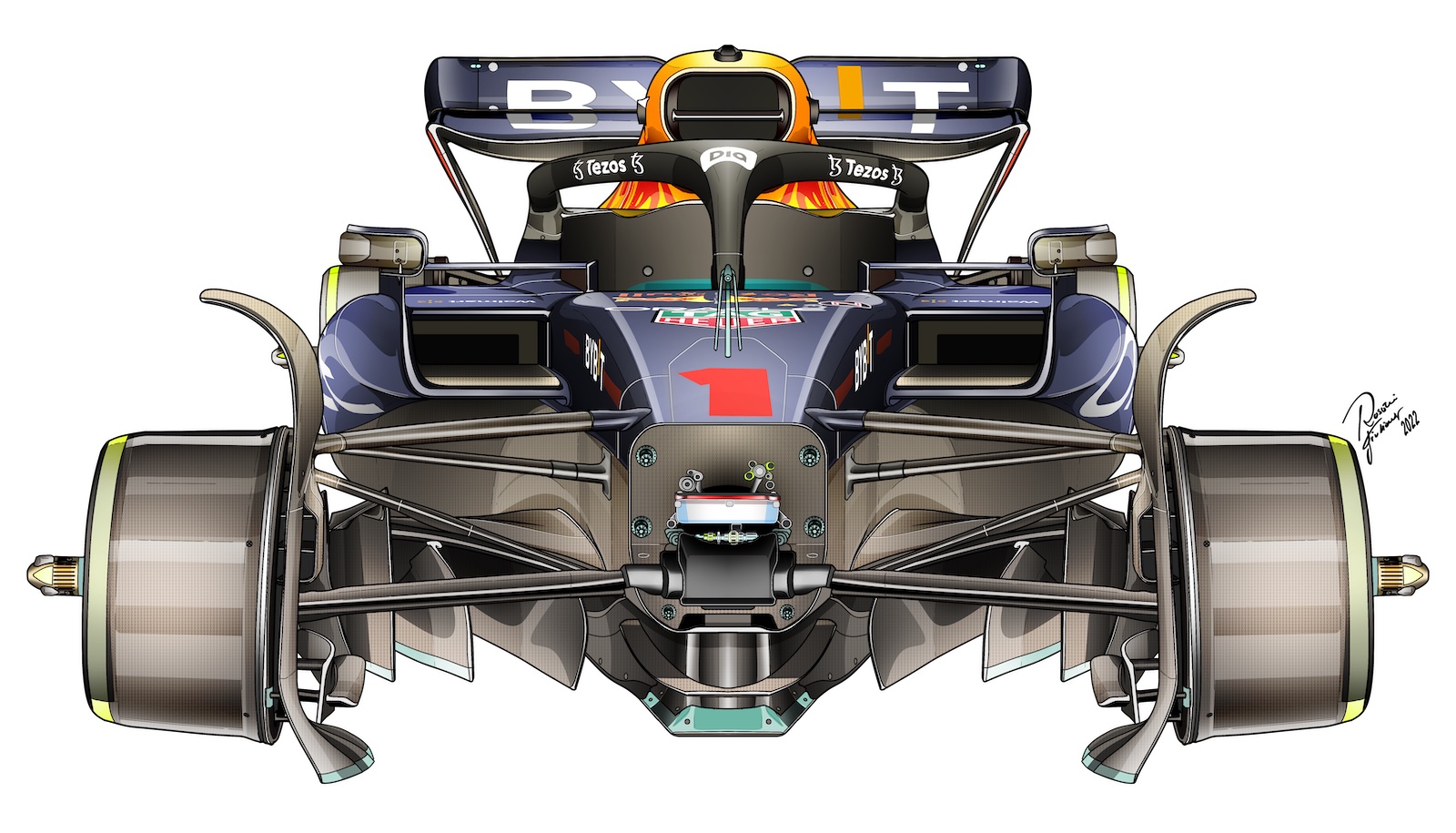 There was also news on the W13, which still tries to find a correlation between the data collected in the factory and the harsh reality with which the team collides on the track. The Brackley team continue to believe the simulation data is encouraging and shows great potential. However, for various reasons, Mercedes never manages to put everything together on the track.

The floor introduced in Spain helped in part against porpoising, especially to limit its triggering when cornering. On the straight, the W13 still suffers from this aerodynamic phenomenon and is forced to adopt more rigid structures and less loaded wings. 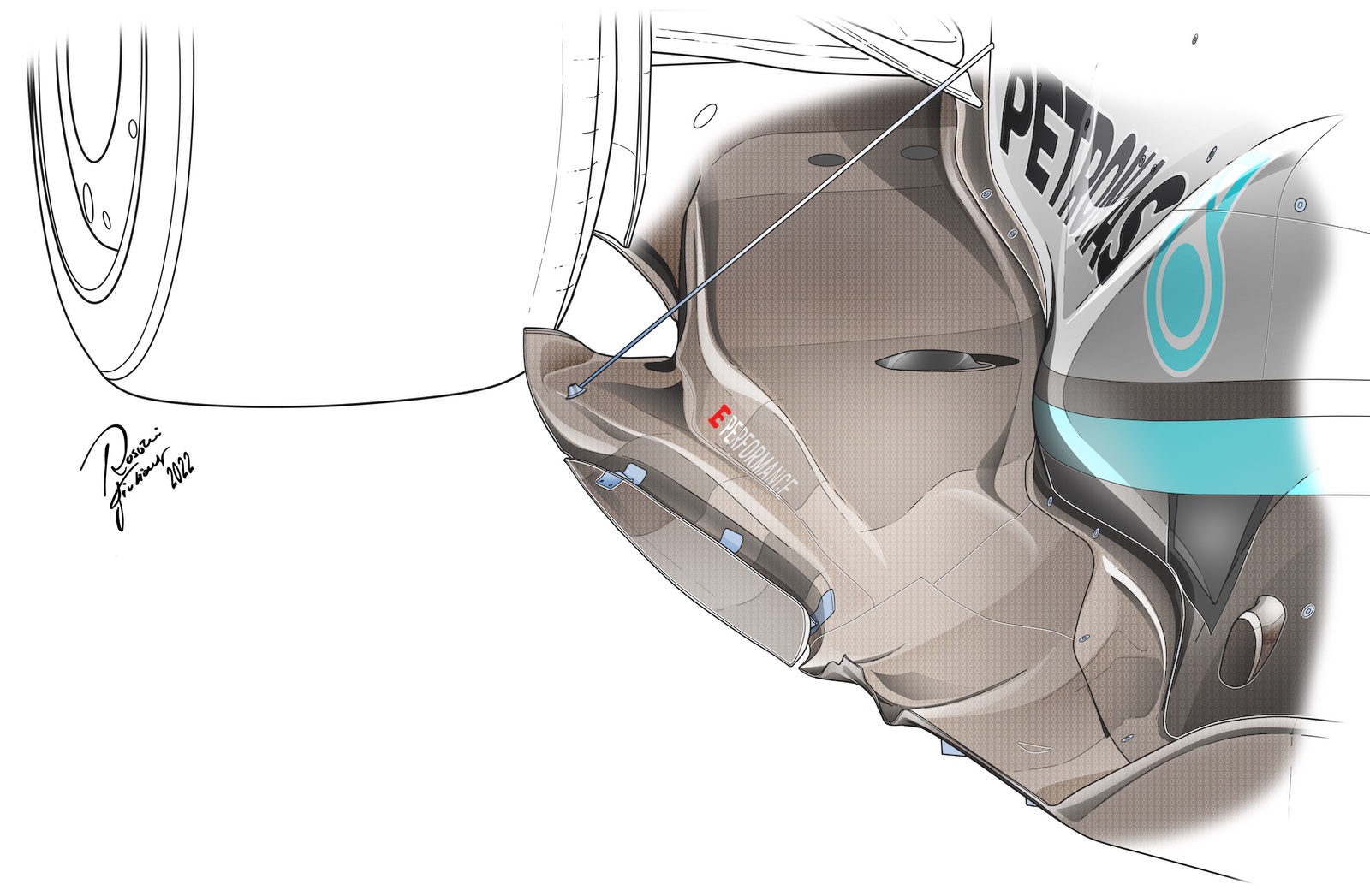 In Baku, the W13 revived the rear wing introduced in Miami, after discarding the low-load early season solution with the flap DRS cut. The wing brought to Baku has a fairly neutral main profile to try to gain km/h on the straight. We have seen that on the W13 a good part of the paint has also been removed from the rear wing, as well as the red shade of the sponsor Ineos from the lower edge of the main plane.

Mercedes has also brought a small update to the sidepods, implementing a small vertical element under the upper SIS, which in the “zero sidepods” concept of the W13 is exposed and covered by the bodywork to function as a real wing. 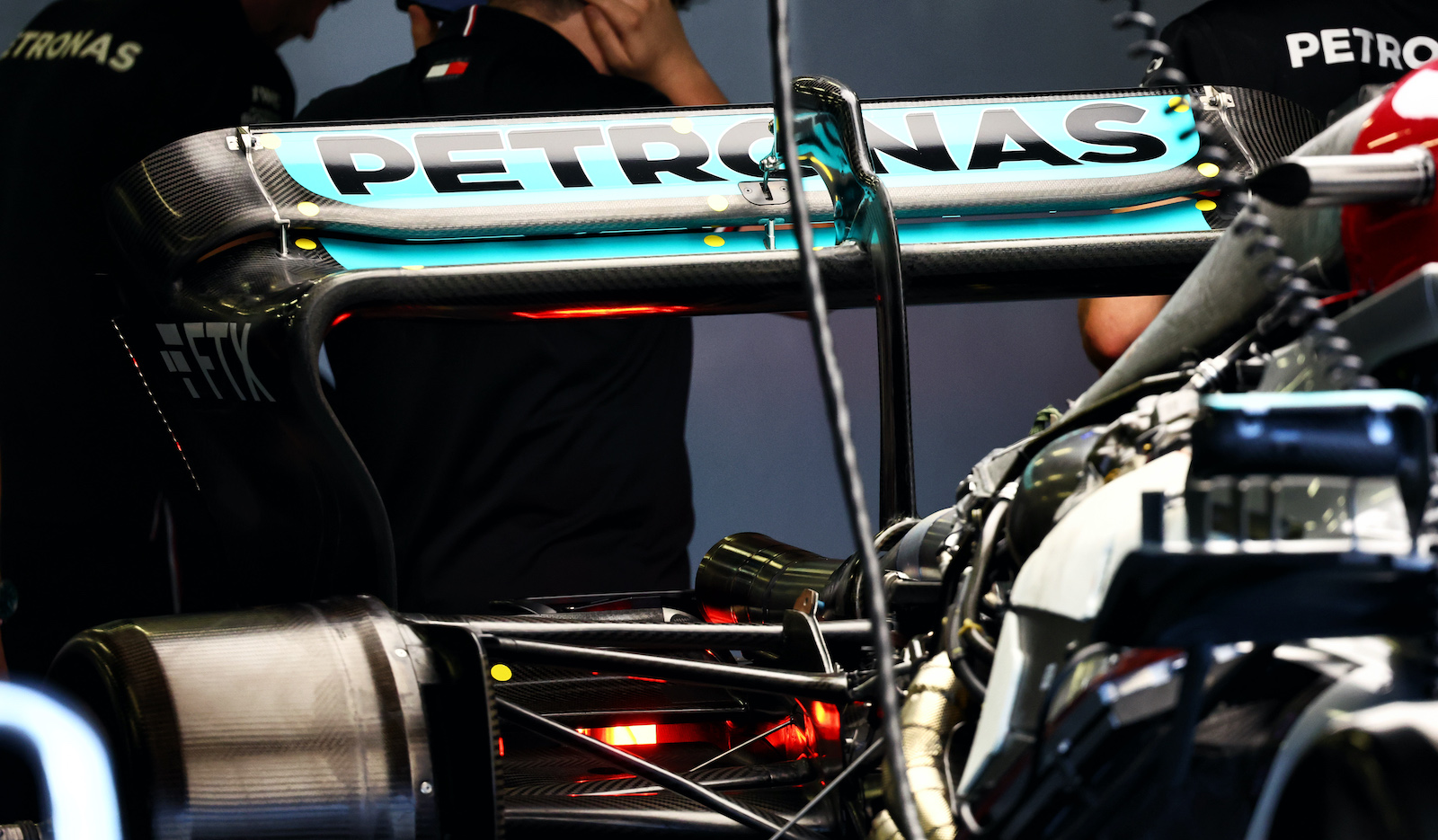