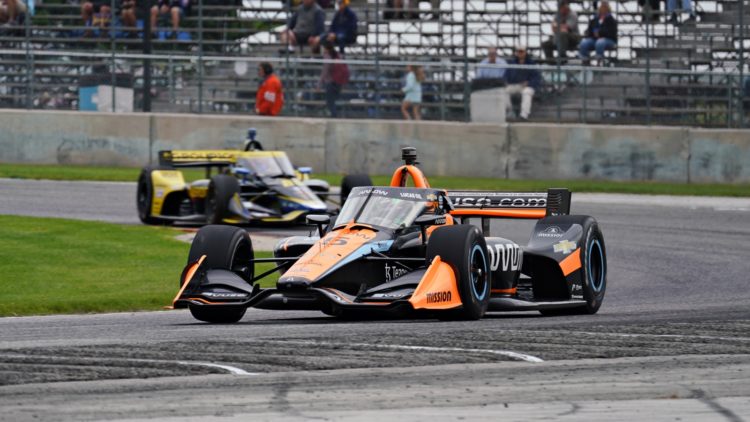 The second IndyCar practice session from Road America took place on Saturday morning, and Pato O’Ward took the top spot on the timesheet.

The young driver lapped the long course in 1:45.2681 as time expired, roughly half of a second faster than yesterday’s fastest practice time.

His Arrow McLaren SP team did a lot of work overnight, and those changes put the car right where O’Ward wanted it.

Will Power, who held the top spot for much of the session, ended the morning practice in second place, just ahead of Alex Palou.

Yesterday’s fastest driver Alexander Rossi had a little clutch issue and was not able to put in laps until the second half of the 45 minute session.

Once he was on track, however, there were no issues and Rossi was able to put in the fourth fastest time of the day.  Josef Newgarden rounded out the top five.

Simana De Silvestro was again at the bottom of the order, but remained very close to the other drivers and remains hopeful she can compete for positions in the race on Sunday as she gets used to her Paretta Autosport Chevy.

Conditions were quite a bit different than they were for Friday’s practice session, with a clouded sky and a cool breeze covering the track.

The cooler temperatures led to a few drivers locking up their tires in the tricky turn 5 braking zone, but everyone was able to stay on track and the session completed without any stoppages.

Conditions will remain nearly the same for the afternoon qualifying session, although a stray rain shower may move through to complicate matters.