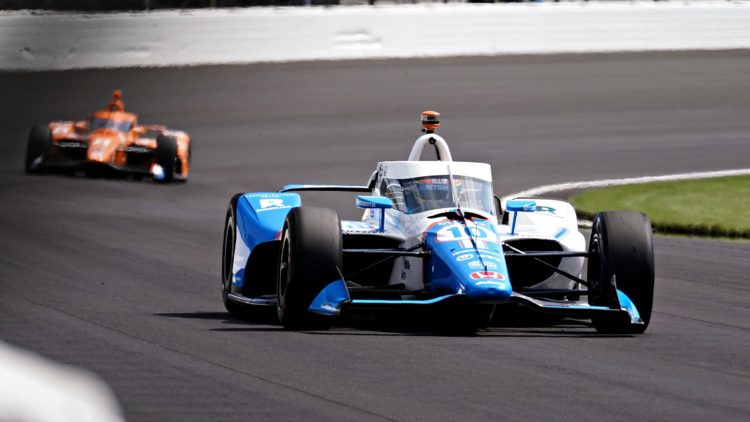 Alex Palou led another session that was filled with Ganassi drivers at the top of the charts. Photo: Kevin Dejewski

Alex Palou turned the fastest lap in Monday’s Indianapolis 500 practice session, logging a lap of 229.441 MPH around the 2.5-mile oval.

Speeds were noticeably slower than the previous day’s qualifying runs on account of turbocharger boost levels being returned to their lower, race-approved levels, which removed a significant chunk of horsepower from the 2.2-liter engines.

The reigning series champion led a couple of his Chip Ganassi Racing team-mates at the top of the charts, with Scott Dixon and Jimmie Johnson having the second and third fastest laps respectively.

Having Ganassi cars populate many of the top spots, indeed four of the top five with Marcus Ericsson in fifth, is nothing new for this year.  The historic team has been on point all week and looks to be in fine form for the race next weekend.

Sitting in fourth and breaking up the team’s lockout of the front spots was Takuma Sato, who has also made a habit of placing himself at the top of the timesheets for nearly every session run so far.

With qualifying in the rear view mirror, all 33 drivers were fully focused on race setups and racecraft.  There was no shortage of on-track passing and brave maneuvers as everyone got a feel for how the race would play out next weekend.

That plethora of action led to Dalton Kellett becoming the first driver of this year’s proceedings to have a hard impact with the wall.

Kellett was jockeying for position with Romain Grosjean, when the Frenchman decided to fight for the position entering turn 1 a little harder than is typical for practice.

The AJ Foyt Racing driver had to enter the corner in a higher line than he had planned, and lost control.  The car spun halfway around and the left side of the cockpit impacted the outer SAFER barrier.

Kellett was able to walk away from the incident and only had a bruised foot to show for his trouble.  The car itself, however, will need a considerable amount of work before Carb Day on Friday.

McLaughlin had a bit of an exciting moment pulling out from his pit box halfway through the session.  The Kiwi’s yellow Pennzoil car ended up facing the wrong way after he was a little generous with his burnout.

Jack Harvey also had a bit of electrical trouble early on, but his Rahal Letterman Lanigan Racing team was able to quickly work out the trouble which allowed Harvey to take in some valuable track time.

87 laps were turned by Stefan Wilson, who had to skip out on qualifying due to the team needing to swap an engine on Saturday.

The next time drivers will see the track will be for Carb Day, which hosts the final practice session and takes place on Friday at 11:00 AM Eastern Time.