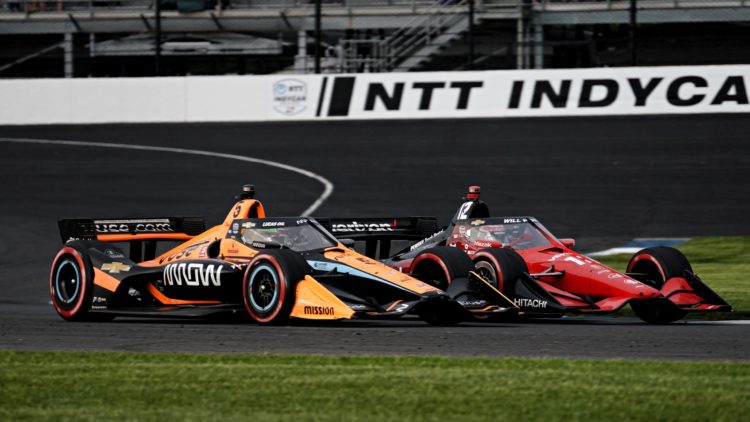 OWard stayed on slicks longer than anyone else dared. Photo: Kevin Dejewski

During the final laps of the IndyCar race from Indianapolis on Saturday, the rain began falling harder than at any other point in the race.

A few drivers, including Pato O’Ward, chose to keep their track position and stay on slick tires as the track became more and more wet.

Other drivers were spinning through the turns while behind the safety car, but O’Ward was able to keep control and even battled side-by-side into to turn 1 on the restart with the rest of the field coming behind on rain tires.

The gamble did not pay off in the end as the conditions deteriorated quickly, but the talented young driver was able to keep his car on track, and made it safely into the pits to finally fit rain tires with a few laps to go.

O’Ward’s skill in keeping his car facing the correct direction did not go unnoticed by other veterans, and Will Power called out the display of car control he had just witnessed.

“Very impressive,” said Power after the race.  “At the end of the day, it blew my mind that Pato kept hanging out [on slick tires].

“I thought maybe they red-flag this, and he gets that second position.  That was smart.  He was going to hang on as long as he could because if it goes green again and he survives turn one, two, and there’s a crash, he is in the same position.

“Yeah, he is someone that can hang on to a car like no one else.”

O’Ward has frequently referenced his quick hands as the key to his success, and that ability surely helped him to wrestle his Arrow McLaren SP Chevy around in the wet conditions.

Simon Pagenaud also commented on the skill of the 23-year-old, by pointing out that even he, as a ten-year veteran, wasn’t certain that he could have done the same thing.