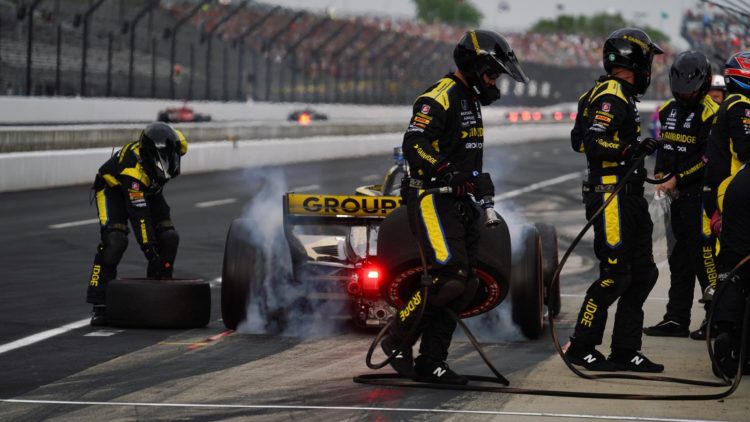 It was a chaotic and wild IndyCar race at the Indianapolis road course, with changing conditions leading to a large number of factors leading to the final running order.

A strategy call in the first two laps as the track was quickly drying, however, gave Colton Herta the biggest advantage and led to him taking his first victory of the year.

Herta was one of only two drivers that chose to come into the pits to take on slick tires on the second lap, and that undercut instantly boosted him from his starting position of 14th all the way up the lead.

Speaking after his win, the 22-year old described why that was the key moment that helped the rest of the day fall into place.

“It was really just the call for wets to slicks,” said Herta when asked what the most important part of the day was.  “I think we gained 15 spots on that transition.

“We pitted on lap three.  Everybody pitted on lap four or five.  We gained 15 spots in that transition to go from 15th to first. Yeah, it was really cool.

“I felt that feeling of what [other drivers] were describing when the fronts go off and you get more under-steer, and what happens with the dig level.

“Thankfully it ended up being that way, and yeah, great stop to get me back out there and then try to stay on the track and reap the benefits.

“The most interesting thing is you never have a car that works in the wet and the dry.  It’s just not possible, but it happened today. It was very interesting.”

Even though there were a significant number of incidents throughout the rest of the time-limited two hour race, Herta was able to stay out front and away from much of the trouble.

He ended up leading two-thirds of the 75 laps, but did have to make a few passes along the way due to the changing conditions leading to many pit stops.

Later in the race he and his Andretti Autosport team actually made the wrong call and attempted to run slicks again.

But, fortunately for them, the rest of the field also made the wrong call and everyone had to come back in to fit wet tires to finish the race.