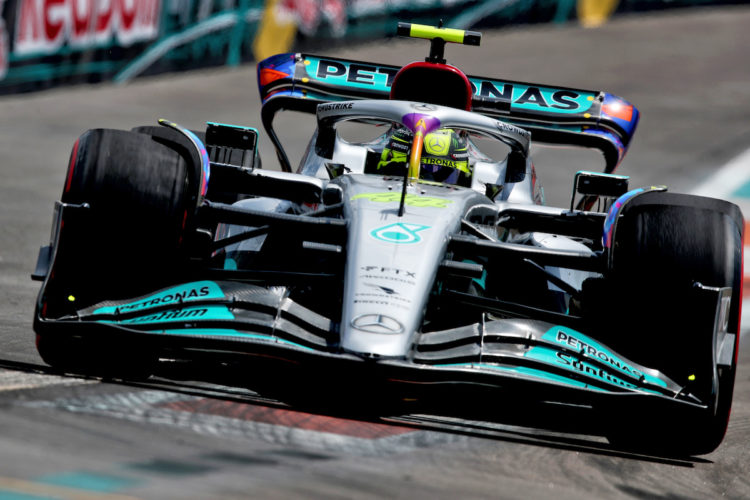 Lewis Hamilton says that Mercedes has “definitely improved” its W13 Formula 1 car after holding discussions with engineers during Friday practice in Miami.

Mercedes ended the second practice session from the US event on top of the timesheet, with Hamilton’s team-mate George Russell leading the pack.

It marks a strong display for the team on a weekend that it has introduced upgrades to its front, rear and beam wings.

The reigning Constructors’ Champions have struggled with severe porpoising across the opening races, which has hampered its performance compared to its front-running rivals.

Although Hamilton conceded that the car seems similar in feel to him, he said that following Friday’s action in Miami, Mercedes “seem to be quicker here”.

He added: “Later on they [the engineers] were explaining to us we definitely have improved in some way, I’m not sure where that is, we still have the bouncing, we haven’t cured it, but bit by bit we’re improving the car.”

The seven-time World Champion commented on the bumpy nature of the Miami track, which has been constructed around the Hard Rock Café Stadium for the sport’s first visit to the city.

“It’s kind of crazy – you think people in this day and age should be able to make a flat road relatively easy but it was fricking [bumpy],” Hamilton said.

“Big big bumps in so many places where the track joins up somewhere else, don’t know if they’ll be able to grind it at night and improve it, otherwise the track is quite nice to drive, except for the chicane.

“It’s so tight, reminds me of being at the B&Q car park when I was six or seven years old, in the go-kart, going in between cars.

“It’s a corner that maybe in future they can remove that one and it’ll improve the track.”