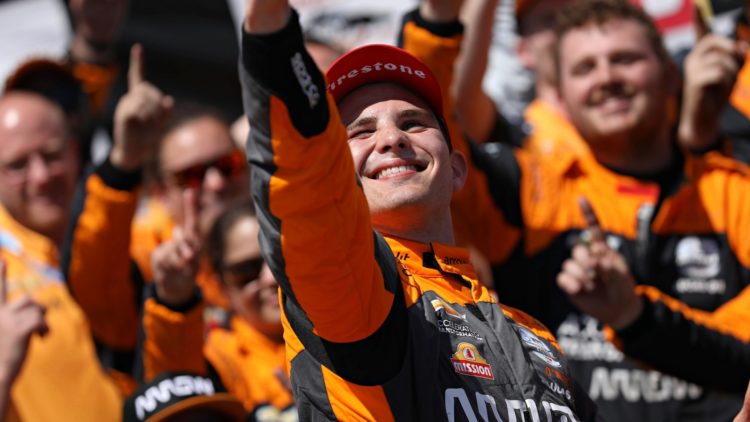 O'Ward was quite pleased to take home his first win of the season. Photo: IndyCar

Word is out that Arrow McLaren SP intends to extend the contract for its star driver Pato O’Ward, and that knowledge has already made a positive impact on the team.

O’Ward was visibly frustrated at the start of this season, and it was revealed that he had been talking to other teams while trying to sort out his future in the sport. Not to mention the young talent’s interest in possibly moving to Formula 1 in the future.

Aligning with that frustration, the start of the year saw him have two consecutive finishes outside the top 10, the first time that has happened since his rookie season in 2019.

But now with a deal nearly in place to keep the talented driver at AMSP, there seems to have been a large shift in the overall demeanor of the team.

O’Ward has been smiling and joking every chance he gets, and last weekend at Barber Motorsports Park he was able to put a complete race together to get his first win of the season.

Off track problems can affect performance on track quickly, but a boost in confidence that comes from a contract extension can also lead to immediate results.

“I’d say it’s close,” said O’Ward on the negotiations.  “But honestly, you know, we’re into the season already, so I’m kind of — I don’t want to worry about it.  I think things will shape up.

“There’ve been very positive conversations.  I think the vibe in the team is fantastic.  I think that’s what we need going into the month of May.  The rest I think will take care of itself.

“I feel great, man.  I think what last year gave us as a group was kind of that year of fighting for a championship under our belt.

“I think you mental-ize and you realize what is needed to win a championship.  A lot of the times it just matures your patience levels, which ultimately pay off at the end of the race.”

Racing is a team sport, however, and a couple strong performances can boost the confidence of everyone involved, not just the driver.

The knowledge that a winning group of competitors is set to stay together into the future has ripple-effects through the entire organization, and has set up Arrow McLaren SP for success for the near future.

“As the driver goes, the rest of the team goes,” said AMSP President Taylor Kiel.  “He has such an infectious spirit, such an energy, that it’s impactful to what we do in a very good way.

“I think there’s kind of two things there: he’s a very important part of what we do, but as a team you have to be able to compartmentalize things, too. We’re doing so many things, we have to focus on what we’re doing today.

“I would say the drivers in our organization are certainly impactful to the general aura of what we’ve got going on.  Ultimately us as a team, we have to be able to withstand whatever might happen.”