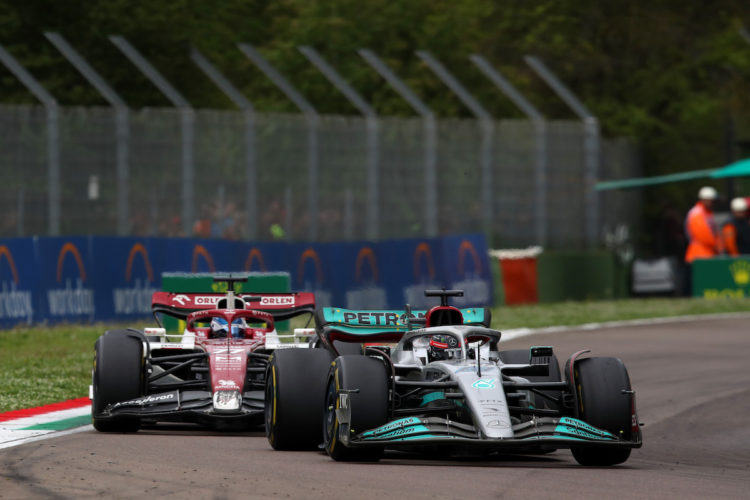 Mercedes’ George Russell admits he had flashbacks to his 2021 crash at Imola with Valtteri Bottas during their battle last Sunday.

One year, the duo were involved in a high-speed crash as they approached Turn 2, with both being eliminated from the race.

The incident resulted in immediate frustration from both parties, with Russell walking to Bottas’ car and appearing to strike the former Mercedes driver’s helmet.

Last Sunday, contact was avoided between the two as they battled, with Bottas crossing the line in fifth, right behind Russell.

When asked if he was thinking about the 2021 crash when fighting Bottas, Russell said: “Definitely! I reminisced a little bit over last year.”

Russell had an issue during his pit stop that meant his front wing-flap couldn’t be adjusted, resulting in understeer as the race transitioned from wet to dry conditions.

However, with just one dry line present throughout the grand prix, Russell says that overtaking was “impossible”, allowing him to stay ahead of Bottas.

“We had an issue at the pitstop, we couldn’t get the front wing-flap in the car and it was just massively understeery,” Russell said.

“It was doubly difficult because I was already struggling with a lot of understeer on the intermediate, so I would have wanted to make a big step initially for that, and then another big step for that in terms of slick.

“That front right was just falling to bits, it was so far out of bed with the set-up. So I just had to manage it and be ready at the end to defend.

“This track here is such an amazing circuit, so much character, but it’s just impossible to race and especially in these mixed conditions, one overtaking opportunity, one dry line, there’s nothing you can do.”