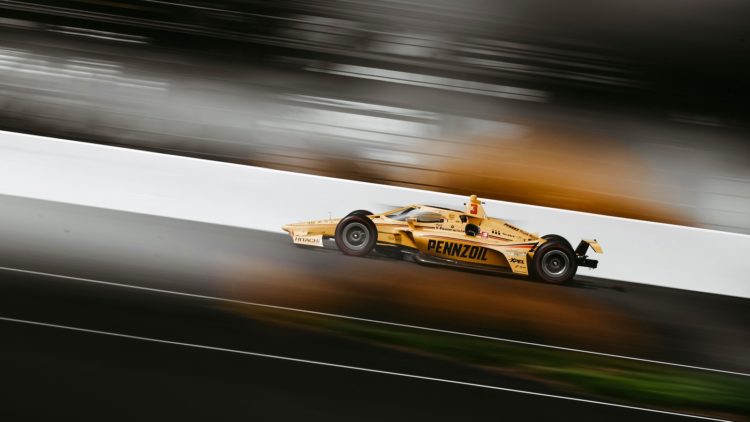 McLaughlin will be running the 'yellow submarine' livery for this year's Indy 500. Photo: IndyCar

The NTT IndyCar Series has revealed a changed qualifying procedure for the 106th running of the Indianapolis 500 next month.

The special race has always had a unique qualifying format in order to build up drama and provide entertainment the weekend before the race itself, and this year’s format will look a little different.

Day one of qualifying will take place on Saturday, May 21, and will see each driver set their fastest times across a four-lap attempt.  Each competitor can choose to make multiple attempts within the six hour session.

By the time day one is complete, positions 13-30 will be locked in, with drivers at the head and the tail of the field having to run again the following day.

Sunday, May 22 will begin with those drivers in the final positions making further qualifying runs in order to determine who gets to make the field of 33 and who has to go home.

There are currently only 32 cars on the entry list, however. If fewer than 34 are attempting to make the race, there will not be a need for this ‘Last Chance’ session because there is no possibility of being bumped out of the race.

A Sunday afternoon session will see the top 12 qualifiers compete for the top six spots, with a further session dedicated to determining the order of the first two rows.

The format to set the front of the field is similar to IndyCar’s standard knockout qualifying for road courses, which has drivers set times to advance to each successive session, eventually culminating in a final shootout for the top positions.

Remaining the same as previous years, drivers wishing to make subsequent qualifying attempts in any of the sessions can choose to wait in line on pit lane or jump the queue in an express lane.

If a driver jumps the line, which would be done to guarantee a run before time runs out, they forfeit their current best time rather than taking the best result from both attempts.

Also on the line is championship points, of which 12 will be awarded to the pole sitter, 11 to the second place qualifier, and on down to the 12th place qualifier receiving one point.

The series has produced an infographic (below) to help explain the new format.  The two days of track action serves as a build-up to the race itself, which will be held the following weekend on May 29.