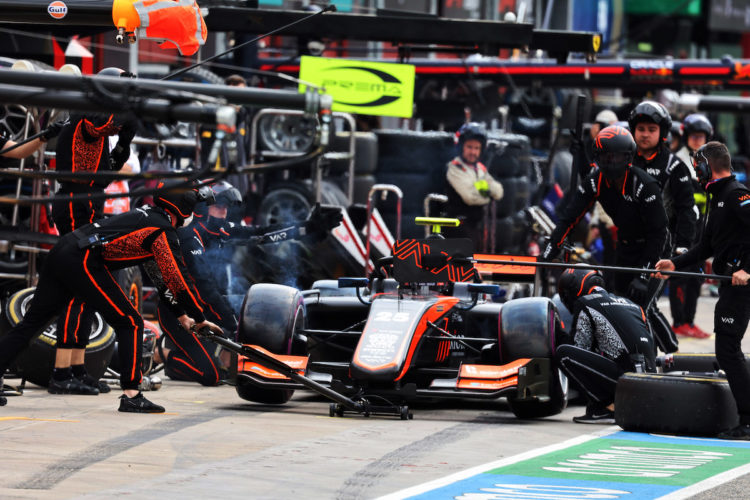 Formula 2 driver Amaury Cordeel has escaped a race ban after he received multiple penalties at the Imola round last weekend.

Cordeel entered the event with four penalty points on his licence, which he picked up in Saudi Arabia after failing to slow sufficiently when passing Logan Sargeant, who had crashed during qualifying.

The Van Amersfoort Racing driver endured a nightmare Feature Race on Sunday in Imola, where he collected five more penalty points in the race alone.

After exceeding track limits three times during the race, Cordeel was issued a warning, before being dished a five-second time penalty and one penalty point for the fourth infringement.

Another track limits violation saw him handed a 10-second time penalty and a further two penalty points, before his sixth infringement landed him a drive-through penalty and another two points, bringing his total up to nine.

Any driver that receives 12 penalty points throughout a season will be handed a ban for the remainder of a race weekend, or the next applicable event.

In 2019, former F2 driver Mahaveer Raghunathan served a ban at the round in Austria after picking up nine penalty points in France, which took him over the threshold. He also tallied up enough points later in the season to serve a second ban, but raced anyway due to a regulation loophole.

Although Cordeel’s track limit violations racked up his penalty points, they weren’t the only rule breaches he was found guilty of during the Feature Race.

He was punished for speeding twice in the pit-lane, once going 39.2 km/h over the speed limit of 60 km/h, which resulted in a 10-second stop/go penalty. A separate incident, which saw him being issued a five-second time penalty, was when he went 3.2 km/h over the limit. No penalty points were handed out for either incident.

He was also investigated for not serving the 10-second stop/go penalty correctly, however the Stewards took no further action on the matter.

“The Stewards determined that upon review of the video and telemetry it was determined that Car 25 was already in the pit lane when the penalty of 10 second stop/go was issued for the excessive pit lane speeding,” read a statement.

“This was an allowed pit stop. During the time of the pit stop the Safety Car was deployed and remained so until the end of the Feature Race, thus depriving him of the opportunity to serve the penalty during the race. Car 25 did not pit again.”

Van Amersfoort Racing was also fined €2,000 as Cordeel’s tyres were not laid flat in the pit lane when he was taking his pit stop, which is required by the regulations.

It also resulted in a suspended five-place grid penalty for the Belgian driver.