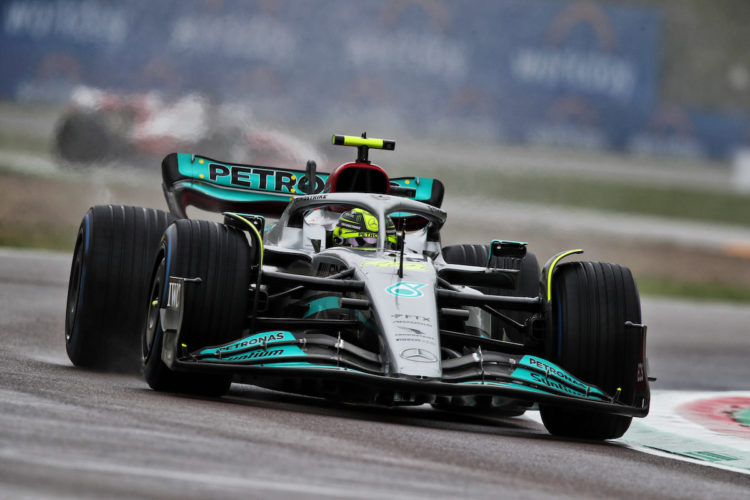 Mercedes is competing “very much in the midfield” over one lap pace, says the team’s trackside engineering director Andrew Shovlin.

The reigning Constructors’ champions lacked pace during qualifying on Friday evening in Imola as it struggled with tyre warm up.

Both George Russell and Lewis Hamilton were in danger of being knocked out of qualifying in Q1, before the pair were eliminated in Q2, ending up 11th and 13th respectively.

Throughout the opening stages of the 2022 campaign, the team has not been in the hunt for pole positions, taking a dip in performance compared to its years of success so far in the turbo-hybrid era.

Track temperatures at Imola were low on Friday, with drivers running in wet conditions throughout the day and some needing multiple laps to build tyre temperature.

According to Shovlin, the conditions showcased the tyre warm up issues that Mercedes has been suffering from this year.

“We’ve struggled with tyre warm up with this car to be honest, we’ve not got to the bottom of it,” he said.

“Today was a painful example of that, where we couldn’t get the runs in that were long enough to build temperature to get the cars into the right window.

“We’ve seen it at all the races – at Bahrain it doesn’t really cost you. At all the other tracks it’s actually been a difficulty in qualifying.

“Our race pace has normally been good, we’ve demonstrated that we’re third quickest on race pace.

“The problem is on a single lap, we seem to be very much in the midfield. It’s an area that we’re working on, but we don’t yet fully understand.”

Shovlin says that the new technical regulations that have been introduced this year have succeeded in restricting drivers from using brake temperatures to warm up their tyres.

“Before you could get the hot air from the brakes straight onto the rim and you get a very rapid transition of the heat there through into the bulk of the rubber,” he said.

“The regulations have been designed to make that difficult and they’ve succeeded. But we need to understand why we can’t match the midfield teams.

“We know Red Bull and Ferrari have got more downforce right now but we should be able to perform in the same position that we’re racing in, which is realistically the third quickest team.”